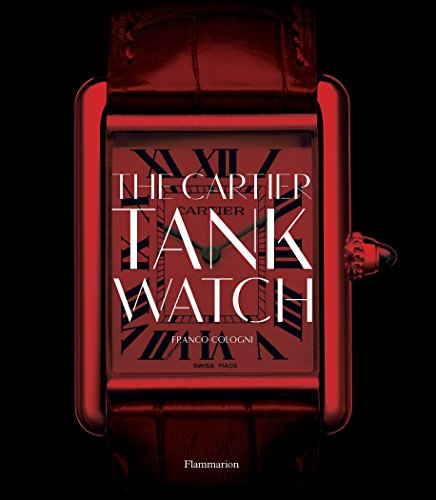 From the outset there are several things that the perspective reader must be made keenly aware of before diving into The Cartier Tank Watch. First is that this is a book which lives up to its title by employing a laser focus and intense examination of the Tank watch. Second, is that there is no question that the quality of the book, its authorship, its content, and the product that it speaks to is everything that you have ever read or heard with regard to Cartier’s prowess as a purveyor of luxury jewelry.

“The Tank is one of the few watches in horological history to be deservedly considered an icon in terms of both function and form, with aesthetic considerations having dictated its technical developments, making it the shaped watch par excellence . . .”

Cologni traces the Tank’s 100-year revolution at birth through its evolution until we reach the Tanks of the 21st century. There are few objects of desire that have survived for a century and still remain a standard for good taste, timeless design, and in general a silent signal of having arrived to those who recognize it.

Take note that the Tank is unisex and spans worlds of seemingly unlimited appeal. The Tank watch is the common thread that links the likes of Rudolph Valentino, Andy Warhol, Princess Diana, Gianni Agnelli, Duke Ellington, and Piet Mondrian to preview just a minute sampling of those who have worn and wear a Tank watch.  Its appeal is overwhelming and crosses just about every possible profession, social stratum, and continent.

While the book takes the reader on a historical journey of a watch that was indeed named after a Tank, Cologni also imparts some history of Maison Cartier as well as just the facts germane to the Tank watch. The documentation is flawless as are the crystal clear mages of each of these incredible variations on the original Tank’s DNA. Most of us with a modicum of horological savvy know of the Tank watch in its purest state, but how many of us realize the dozens of permutations that were spawned by the original case, face, dial, hands, crown, and strap designs.

The appeal and magnetism of this book is aimed at those who are horologically inclined, those who must know all there is to know about all things Cartier, and most of all those who revel in the origins and history of a status/style symbol that has withstood the test of time in the ever-changing world of fashion.