Carried in Our Hearts: The Gift of Adoption: Inspiring Stories of Families Created Across Continents 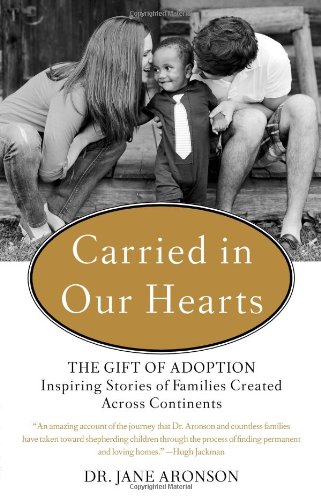 The introduction to Carried in Our Hearts reads, “These stories need to be told,” and Dr. Jane Aronson does so with honesty told with insight, love, conflict, and conviction.

This collection of adoptive families around the world is wisely divided into eight thematic sections, the headings of which convey the essence of the essays in each. They are: The Decision, The Journey, The Moment We Met, Early Challenges, Becoming A Family, A New Life, Reflections: Children Tell Their Own Adoption Stories, and The Children Left Behind.

The author/editor of this collection is Dr. Jane Aronson, who has two adopted boys of her own from Ethiopia. Dr. Aronson is a pediatrician who specializes in adoption medicine and who founded the Worldwide Orphans Foundation. To say her heart, body, and soul are thoroughly invested in helping children (professionally, personally and collectively) would be an understatement.

UNICEF estimates that there are 153 million orphans in the world. Dr. Aronson is trying to get as many of them into families as possible and make sure those not adopted are treated with dignity and care.

The title of the book comes from an adopted child’s remark overheard by her mother when she was speaking to another young child her age. Her daughter’s friend said she was carried in her mother’s tummy and the adopted daughter replies, “My mommy didn’t carry me in her tummy; she carried me in her heart.” That line alone could make the harshest reader’s heart melt, but it is just one of many poignant moments revealed throughout this compilation.

Molly Wenger McCarthy, who has three children, including daughter Lu from Ethiopia, sums up the experience of adoption (and having and raising children by any means) with an insightful and comprehensive line, “The home side of our adoption is a humbling, astonishing, crazy, poignant mess of a life.”

Shonda Rhymes (creator of TV shows Gray’s Anatomy, Private Practice, and Scandal) tells about her need to surrender control to the process, as she adopted her daughters, as does actress Mary-Louise Parker and many others who had children previously or were adopting for their first time.

All of the parents who adopted also spoke about learning how to balance doing what they could for the process to move forward and simultaneously letting go of what was beyond their grasp or ability to change. Some might liken it to an adoption parent’s version of 12-step programs’ serenity prayer.

The section titled Early Challenges is especially helpful and necessary to give readers an objective perspective of the difficulties that can arise in the midst of all the goodness and joy. Physical and mental health issues, birth parents changing their minds, governments saying “no” at the last minute, adopted children having difficulty adjusting to a new environment and language, etc. can all take place before, during, and after adoption, just as painful issues can arise with biological children.

Carried in Our Hearts proclaims to contain stories from “families created across continents,” which may lead one to believe that the essays include a variety of adoptive parents (culturally, nationally, and of various financial means), but the reality is that ninety percent of the families who speak about their experience in the book are not only privileged white Americans, but also predominantly from the New York area.

This is not surprising due to the author’s circle of contacts and practice, but it would have added an enriching depth and perspective if there had been as much diversity with the adoptive parents as there is with the children who were adopted.

There is also only one story about an adoption not working out and the child being returned to the orphanage or childcare center. There may be fewer unsuccessful adoptions internationally (which is the primary focus of this collection), but on a local level there is a higher percentage (as much as 50% in some areas), in which the children do not stay in the adoptive home.

Unless readers have personal experience with such, they may not be aware of this fact and may be inclined to see only the rosy part of the picture. The final section, The Children Left Behind, provides information about what can be done for all those who are not yet in a permanent, single family home.

Whether you have children, are thinking of having children, thought about adopting or adopted hundreds, Carried in Our Hearts is an inspirational and timely collection. There is great care, hope, and love in these pages.