Carol and John Steinbeck: Portrait of a Marriage 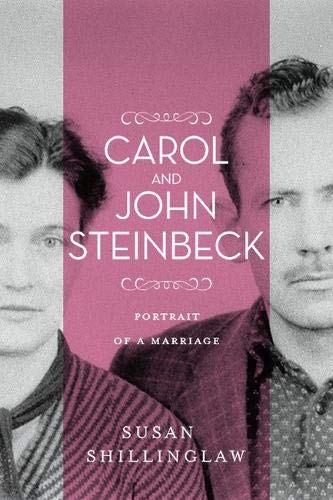 “. . . fascinating as it lays open the background of two intriguing personalities . . .”

Susan Shillinglaw’s new biography, Carol and John Steinbeck: Portrait of a Marriage delves into the depths of a relationship and discusses the ups and downs, plusses and minuses, positives and negatives of these two people: the artist and the muse.

Shillinglaw opens with the minute details of the family histories through the adolescence and young adulthood of Carol Henning and John Steinbeck. Carol, a person who has been in the shadows, emerges as a strong individual with her own sense of independence, regardless of parental guidance. She is shown as an opinionated child and woman who takes control of her own life early on and never lets go.

John Steinbeck emerges as a well liked child and young man who developed a great love of the American West, especially Salinas Valley. That love expanded to include much of California as well as Mexico—locations that appear in much of his work. He had a close relationship with his sisters, especially Mary, his younger sister.

Both Carol and John had strong mothers. Nellie, Carol’s mother, often shared stories of the trials she experienced growing up in the late 19th century, “the daughter of a forty-niner”—tales that created Carol’s love of stories. Yet Nellie’s strong religious convictions never developed in Carol and frequently caused riffs in their relationship.

Much like Carol’s, John’s love of reading and writing stories grew early and mostly from his mother, Olive. Her strong personality moved him to develop strong women in his fiction. “He valued their wisdom and heeded their counsel.”

The fathers in both of their lives remained less outgoing and largely existed in their wives’ shadows. While they were both good, ethical men, each preferred the company of other men rather than the women in their lives.

If there is a story of love at first sight, Carol and John Steinbeck would fall nicely into that category. From the first moment of their meeting, they were not out of one another’s lives for any long duration.

During the 1920s, when women were evolving as “New Women” through the freedoms experienced in the Jazz Age, Carol kept the concept of marriage at arm’s length and would only enter into a marriage as a full partner, not a subordinate partner.

They did marry in 1930 and entered into a fluid relationship of equality although as Shillinglaw puts it, “It cannot have been easy to be married to John Steinbeck, a man obsessed with words.” It was clear early on that John considered his stories and books his children, and he had no real desire to add children into his life.

Many friends wandered through Carol and John’s lives and in many instances John characterized many of these people in his stories. Among the players woven through their lives, one of the most important was Ed Ricketts, a marine biologist and close friend who was frequently redesigned throughout Steinbeck’s many works.

Ed Ricketts owned a biological supply laboratory in New Monterey when he met Carol and John, and this lab soon became the meeting place of the friends and acquaintances that became close confidants. The relationship between Ed and John became one of soul mates, oftentimes leaving Carol on the outside.

Also entering into the Steinbecks’ lives was Joseph Campbell, who eventually became renowned for his writings and interest in mythology. Prior to his entry on the scene, both John and Ed had expressed interest in various levels of “the occult, the mystical, the transcendent . . .”

Upon Campbell’s arrival, Steinbeck, Ricketts, and Carol enjoyed deep discussions on “human bonds with nature as well as nature as generators of myth.” During the period that Campbell spent with Carol and John, a romantic interlude occurred with Carol that did not end until John sent Campbell packing.

And yet, regardless of such interludes by both, Carol remained dedicated to John. The Campbell episode recharged the marriage. In the chapter titled Wave Shock, 1932–35 Shillinglaw details these three years during which the marriage was renewed; during this time Carol was particularly tough with her criticism of John’s writing, acting as his conscience. Throughout this story, Shillinglaw makes it clear that their relationship, at least early on, thrived on the push and pull that Carol gave to John’s work.

Throughout their marriage, Carol’s actions often placed her in the forefront, a role she relished, while John sat on the sidelines watching and writing. Many of her activities can be interpreted as outlandish or childish, but it was Carol’s way of garnering the attention she demanded. John’s behavior ran the full spectrum from outlandish to reserved.

But it is obvious throughout the book that during their marriage, Carol was the person who bolstered John’s drive to write. She acted as typist, editor, and when needed, marketer of his works. Although she created her own works in poetry and reached out to visual arts as well, her role in John’s life was primarily to support his work.

In the 1930s, Mexico became the Paris of the 1920s with expats, artists, and tourists discovering a new way of life. Carol and John took advantage of this with a lengthy journey through Mexico—a journey that invigorated John. During the last half of the decade he produced many of his most important works, including Of Mice and Men, The Grapes of Wrath, and The Sea of Cortez.

The Grapes of Wrath is considered the major work of the time with its depths in the social injustices of the times. The time spent in Los Gatos, California, while writing Of Mice and Men and The Grapes of Wrath, among other stories, essays, and books, was a volatile time in the state’s history and played a large part in developing John’s political beliefs.

Carol was the more politically engaged of the two, and was “. . . fully in step with Steinbeck . . . choreographing his march towards activism.”

It was also during this time that John’s fame grew and their lives began to change. John did not enjoy associating with other literary persons, and while keeping Ed Ricketts in their close circle of friends, John and Carol began to develop friendships with people in their own political spectrum.

In The Grapes of Wrath, Steinbeck showed a commitment to the white migrant worker that was not well received in many communities. Many of the authors and artists who lived in the same area held political beliefs opposite to the Steinbeck’s, and when The Grapes of Wrath was published these authors frequently criticized the book and attempted to tell the other side of the story.

At the end of the 1930s and the Great Depression, the marriage began to dissolve. John became infatuated with another woman, Gwen (Gwyn) Conger, and by 1942 John and Carol Steinbeck had divorced. Both went on to other marriages, and yet neither ever achieved the bond that drove John to his greatest works.

While the entire story of the relationship between Carol and John Steinbeck is extremely interesting, many of the sections spend a great deal of time on backstory of the people who surrounded and influenced this couple, sometimes taking the reader away from the point of the story. Yet it should be noted that these lengthy backstories are important to the path the relationship takes.

Fans of Steinbeck’s writing will find this book fascinating as it lays open the background of two intriguing personalities and the influence each had on the other.