Carmen and the Staging of Spain: Recasting Bizet's Opera in the Belle Epoque (Currents in Latin American and Iberian Music) 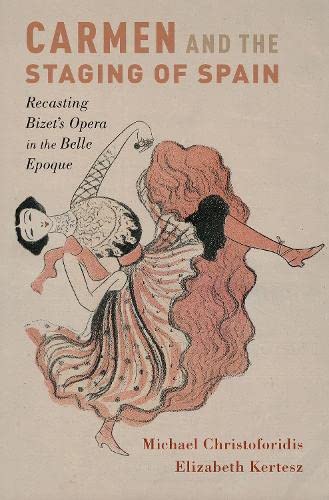 “There are detailed descriptions of performances of the opera and adaptations it inspired and the book is richly illustrated. Carmen and the Staging of Spain is a fascinating read for opera fans and students of cultural history.”

Carmen and the Staging of Spain traces the history of productions of Carmen from its 1875 Paris premiere through World War I in France, Spain, Britain, and the United States, focusing on the way Bizet’s opera intersected with ideas and stereotypes of Spain during what was called the Belle Epoch.

By the time Carmen had its premiere, Spanish song and dance were already popular in Parisian theatres and cabarets. The opera, then, capitalized on a fascination with what was seen to be an exotic, primitive (compared to France’s), culture. Carmen’s arias, which became widely popular, were based on Spanish songs, the habanera and sequidilla, and inspired more music and theatre.

After its premiere in 1875, Carmen became central to the changing representation of Spain in Paris and other metropolitan centers. Carmen may not have been a sensation at its premiere, but it was the most popular work at the Opera Comique throughout the 1880s and 1890s and had a gala 1,000th performance in 1904. Through those years, new productions attempted to be increasingly realistic in terms of their visualization of the Spanish setting.

Singers performing the title role also aimed for verisimilitude. Carmen was bound to attract divas with a flair for theatre. She is, after all, not only a seductive gypsy factory worker; she is also an entertainer who seduces through her song and dance. The gypsy also defied conventional sexual mores.

The authors describe in detail the ways in which performances of the title role by a variety of singers from the first Carmen, Céléstine Galli-Marié, to French diva Emma Calvé, Spanish sopranos Elena Fons and Maria Gay, and American opera and film star Geraldine Farrar, projected a changing image of the Spanish gypsy.

While some Spanish critics found the opera’s representation of bullfighters ludicrous and some of the music decidedly un-Spanish, theaters in Madrid fought over the rights to produce the work, which was successful enough in Madrid and Barcelona to spawn Carmen-inspired zarzuelas and staged parodies. Meanwhile, in France, the opera became increasingly popular as the French were exposed to more Spanish music and art through expositions, nightclubs and concerts. The authors describe many of these offshoots of Carmen’s popularity.

Carmen became the basis for plays, ballets and, eventually films. Excerpts were performed in music halls and cabaret. As flamenco developed musically and in popularity during the late 19th century, it too contained songs and dances based on the Carmen story. Escamillo’s “Toreador Song” was often played at real Spanish bullfights.

Excerpts from Carmen became available as sheet music and or early phonograph recordings. As the opera and its title character were presented in a number of musical and theatrical genres and media, they grew as highly popular purveyors of a changing image of Spain.

Carmen and the Staging of Spain is the product of exhaustive and careful research. Its documentation is presented in often lengthy footnotes rather than the usual endnotes. Its nine chapters move back and forth across the border between France and Spain but also include London and the United States, ending with Geraldine Farrar’s controversial embodiment of Carmen in silent film and at the Metropolitan Opera. She, like her predecessors, was interested in a convincing dramatic interpretation. Like them, she was also projecting an idea of Spanishness in the most popular of all French operas. There are detailed descriptions of performances of the opera and adaptations it inspired and the book is richly illustrated. Carmen and the Staging of Spain is a fascinating read for opera fans and students of cultural history.