The Caretaker: A Ranjit Singh Novel 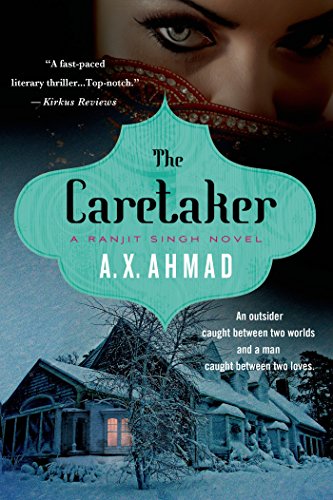 “. . . a wonderful and suspenseful debut novel.”

The Caretaker is a fascinating thriller and the story of Ranjit Singh, a dishonored former Captain of the Indian Army forced to flee his own country.

Plagued by hallucinations and nightmare flashbacks from his past, Ranjit Singh arrives in America with his family and takes a job as a landscaper/caretaker for wealthy residents on Martha’s Vineyard. One of his clients is Anna Neals, the wife of African American Senator Clayton Neals. Attracted to Anna, Ranjit agrees to accept a job as caretaker for her husband’s property.

Meanwhile on the island two hustlers are breaking into expensive vacant homes and robbing the owners. Ranjit encounters the two likely suspects outside a convenience store and makes a narrow escape when Anna Neals arrives on the scene.

In the dead of winter, the furnace breaks in the house Ranjit rents. He secretly moves his family into one of the senator’s vacant homes. While his wife and daughter are happy there, Ranjit struggles to forget his brief affair with the senator’s wife.

One night, two armed men enter the house. Ranjit escapes with his family, and soon learns the men want an old doll his daughter took from the house. Sought by powerful forces prepared to use deadly means to retrieve the doll, Ranjit and his family are caught in the middle of a political scandal.

Unaware of the significance of the doll, Ranjit has limited resources and only a short time to solve the mystery and save his family.

As he learns more about the Senator’s corrupt world, he must discover who is hunting him and decide carefully whom he can trust—the lives of his family depend on it. To gain trust in return, Ranjit must also confront the most painful parts of his past.

The Caretaker is a clever, well-plotted action thriller. Poignant, nearly paranormal elements come in the form of Ranjit’s hallucinations about what happened on a secret mission during a carefully concealed war.

Haunting flashbacks tie in effectively with the present dangers he faces, and create a moving reaction in both the main character and the reader. The author’s compelling prose raises questions in the mind of the reader, adding to the uncertainty, drama, and suspense. The author successfully addresses these questions on a need-to-know basis. The reader is left satisfied.

The cast includes deep and complex characters, most of them commendable yet realistically flawed. They earn the reader’s compassion. Throughout the novel, the reader is engaged and cares about the plight and vulnerability of a migrant family caught up in a rich man’s world and at the mercy of corrupt politics. The social and racial issues of the novel are real and deeply humbling.

The Caretaker is a wonderful and suspenseful debut novel.

How good does The Caretaker by A. X. Ahmad sound as an audio book? Forget multitasking while you listen to this gripping narration of The Caretaker and follow the story of disgraced Sikh Indian Army Captain Ranjit Singh.

While A. X. Ahmad draws us in with his poignant tale of this migrant family caught up in the world of the rich and powerful, narrator Sam Dastor’s voice holds our attention and makes us stop what we are doing to listen. The pace and cadence of the audio version create just the right mood for this story. Dastor’s versatile voice repertoire adds richness to Ahmad’s characters and brings them off the page and into our living room, car, studio . . . from wherever we are listening.

From the disgraced former Army Captain with his hint of an Indian accent to the plaid shirt American drunk in the liquor store parking lot, the narrated audio version is instantly appealing.