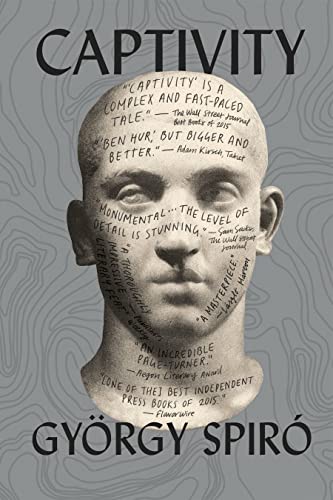 “[a] fine novel that educates and entertains.”

Some historical novels focus on characters, some on events, some are novels of ideas, and still others are some combination of the above. Captivity by György Spiró (a Hungarian name whose English equivalent would be George Shapiro) is an 860-page page-turner whose subject is Jewish identity in a cosmopolitan setting: what it means to be simultaneously a member of and participant in both global and particular civilizations, in this case First Century Greco-Roman Jewish.

The novel is divided into four sections, the first and last of which take place in Rome and other Italian locales, while the middle sections take place respectively in Judaea and Alexandria, Egypt; these three venues represent Roman Jewry’s political, ethnic/religious and cultural/commercial centers roughly analogous to 21st century Washington, DC, Jerusalem, and New York for American Jews.

Its chronology spans from the year of Jesus’ execution until shortly after the end of the First Jewish Revolt. The pace of the novel quickens as it progresses: the events of the first section occur over a matter of weeks with digressions to fill in the background, the second section lasts several months, the third two years, and the fourth more than three decades. Think Ben Hur or I, Claudius told from a Jewish point of view.

The main character is a Jewish Roman citizen named Uri, short for Uriel, whose Roman name is Gaius Theodorus, the first born son of Sarah and Joseph, a merchant freedman, grandson of Tadeus a self-manumitted slave who himself was the grandson of one of the 3,000 enslaved captives (Uri’s great-great-grandfather) who founded Rome’s Jewish community following Pompey’s 63 BCE invasion of Jerusalem. More recent arrivals were Judaean petty criminals whom Herod the Great found it more profitable to sell into slavery to the Romans than to execute.

By converting their prospective spouses—“Syrian, Greek, Arab, Abyssinian, Egyptian, German, Gallic, Thracian, Illyrian” fellow slaves from every corner of the empire and the lands bordering the empire—to Judaism in both the founding and successive generations, Rome’s Jewish community had grown by Uri’s adolescence to 40,000 (out of the city’s million) residents centered in The Far Side, an immigrant slum neighborhood on the Tiber’s west bank. At that time the majority of the Roman Empire’s over four million Jews (its largest ethnic group) lived not in Judaea but in the diaspora, mainly in the Greek speaking cities of the eastern Mediterranean.

First century Judaean-Diaspora relations were even more fraught and ambivalent than are 21st century Israeli-Diaspora relations. Roman Jews ate kosher food, observed the Sabbath, read the Torah in Greek translation every week in synagogue, donned phylacteries every morning, recited the Sh’ma twice a day, and paid an annual tithe to the Temple in Jerusalem, and yet Judaeans viewed them as ritually unclean for living abroad and treasonous for not returning to the homeland.

But the Judaean economy was primarily agricultural and increasingly impoverished, whereas Rome had a dynamic if politically brutal and consequently volatile economy in which slaves could earn enough money to buy their freedom, its freedmen enjoyed a higher standard of living than did Judaean peasants, and fortunes could be earned, lost, and earned again several times within a lifespan.

Roman Jews who returned from visits “would tell of Judaea’s miraculous climate, the incomparable flavors of the foods, the amazing moral character and courage of the Jews over there, the wondrous beauty of the women over there, the matchless treasures of the Homeland, but also the alarming, barbaric, superstitious, and incurable mental disorders that one encountered among the Jews of Palestine that the Jewish enclave in Rome, thank the Lord, [had] been spared to the present day and thus it was to be hoped, to the end of time.”

The book’s title has multiple meanings. Living in exile as a minority is one form of captivity; poverty, ignorance, and superstition are others.

Uri is 19 when we meet him and severely nearsighted; he can only see clearly what he holds close up to his face, a malady that disqualifies him from most occupations and on account of which his previously proud father withholds his affection. As the grandson of a manumitted slave he is a Roman citizen and entitled to a monthly supply of grain with which he helps support his parents and sister, but according to Roman law by his 20th birthday he must marry and support his own family.

Uri is gifted in languages, grows up speaking Aramaic as well as the Greek spoken by his fellow Roman Jews, speaks better Latin than they do, and is a voracious reader, which combined with his myopia makes him socially withdrawn. His Jewish identity and monotheistic faith are strong, but he considers his fellow Roman Jews his intellectual inferiors, and though he covets the educational opportunities available to his polytheist fellow citizens he witnesses the brutality of Rome’s rulers when he sees a soldier about to kill a disgraced politician’s young daughter; when the soldier is told that it is against the law to kill a virgin he rapes her first and then kills her.

Uri’s luck changes when his father’s debtor Agrippa, Herod the Great’s grandson, gets Uri appointed to the delegation of Roman Jews who will bring the annual tithe to the Temple in Jerusalem. This unearned honor incites the suspicion of his fellow delegates and of the authorities in Jerusalem who imprison him upon his arrival.

On the Thursday before Passover Uri’s cellmates are two thieves and a short, fat, balding middle aged itinerant Galilean preacher with a graying beard who are taken away the next morning. Decades later back in Rome Uri will realize that his cellmate was Jesus of Nazareth when a relative converts to Christianity.

After being released Uri is sent to live in the small farming village Beth Zechariah in the Judaean countryside. There, he experiences rural life and peasant Judaism for three months. He then returns to Jerusalem and is allowed to work as a tile setter and mural painter, occupations suited to his myopia, before being permitted to depart for Alexandria, the empire’s largest and most culturally sophisticated city. There through a series of coincidences, his familial connection with Agrippa, and his own talent he will become a protege of and secretary to the Jewish Greek philosopher Philo (whose life’s work was an attempt to reconcile Jewish monotheism with Greek polytheism). He will also become a student at the Gymnasium and will witness and barely survive “the bane”—a horrendous pogrom in which the city’s Jews are forced into one of its five districts and starved and murdered by their polytheist Greek neighbors—after which he’ll return to Rome.

Having met the historical Jesus, Uri will find Christian mythology absurd, but having survived “the bane” he’ll understand Saul of Tarsus’ desire to obliterate the distinction between Greek and Jew, and how in that regard the new religion will have wider appeal than Philo’s writings.

Spiró’s suspenseful plot, extensive research, and translator Tim Wilkinson’s engaging prose make the book hard to put down. The historical research and contextual detail at times makes for less vivid narration than the rest of the story, but it never feels like an information dump.

Knowledgeable readers may question some of the details. For example we are told that by the first century Hebrew was no longer spoken and had been replaced by Aramaic; while that was true in Galilee, in Judaea Mishnaic Hebrew was still spoken up until the defeat of the Third Jewish Revolt a century after Uri’s visit. In Alexandria Uri plays chess and eats oranges, but chess was not invented until several centuries later, and the Arabs introduced oranges to the middle east from India or China about a millennium later.

Spiró refers to first century Judaea, Samaria, and Galilee as Palestine, a word that was coined in the second century after the defeat of the Third Jewish Revolt. Some of Wilkinson’s contemporary idiomatic expressions may seem anachronistic in the first century; he and Spiró seem to be following Ezra Pound’s dictum that all history is contemporaneous.

Another complaint is that the copyediting is slipshod. This volume has a greater than normal number of errors. One sentence begins with two consecutive prepositions both of whose first letters are capitalized, and the very next sentence begins in lowercase and appears to be missing its first few words.

But neither these inconveniences nor its length should deter readers from enjoying this fine novel that educates and entertains. Its realist prose style and temporal linearity should make it accessible to a wide audience.