Capitol Murder: A Novel of Suspense 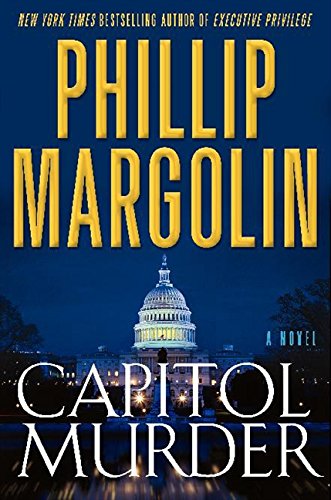 “Capitol Murder disabuses us of any notion that we as a nation can ever let down our guard. . . . like a cold shower—it grabs our attention and gets our adrenaline running.

Phillip Margolin writes a killer follow-up to his political fiction series that includes Executive Privilege and Supreme Justice. In Capitol Murder, Mr. Margolin not only continues his exposé on political corruption in our nation’s capitol, but he also weaves in the issue de jour: terrorism. Reprising his popular characters, Brad Miller and Dana Cutler, he involves them in both, creating a thriller with international intrigue.

To say the author’s characters mirror present day politicians is an understatement. The recent spate of sexual misconduct seems to be a staple in our legislators’ lives, thus Mr. Margolin’s pols mimic the real world. Add into the mix an escaped serial killer and a terror cell intent on blowing up an NFL stadium in the middle of one of the biggest games of the year, and you have the ingredients for a story that will keep you wondering if it’s real or make believe.

With his criminal attorney background, Mr. Margolin is able to create realistic drama and dialogue to draw the reader into his story. Introducing details such as top-secret security clearances and limited access to national security matters, the author brings a contemporary flair to give his novel the realism his readers expect.

As usual, his protagonists are truly bad people. But in this story, Mr. Margolin adds a unique twist to serial killer Clarence Little, showing us just a sliver of humanity and compassion in an otherwise evil human being. Interesting.

There is a hidden conspiracy that reveals itself late in the story that proves to be quite revealing. For those readers with analytical minds and intelligence backgrounds, it may have revealed itself earlier on. That notwithstanding, the story works—it’s quite believable.

As fortunate as our intelligence agencies have been in discovering and thwarting potential terrorist attacks, Capitol Murder disabuses us of any notion that we as a nation can ever let down our guard.

Phillip Margolin’s Capitol Murder is like a cold shower—it grabs our attention and gets our adrenaline running.