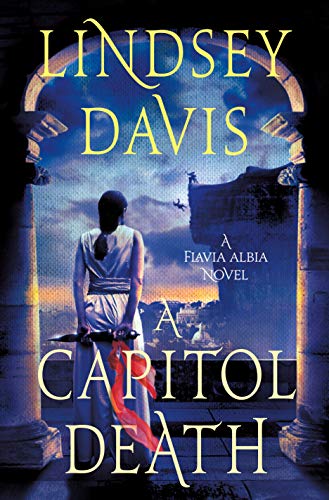 “Fashioning modern methods of investigation as well as other 21st century conventions into acceptable practices in the daily life of ancient Rome may sound like an insurmountable task, but author Davis does it with aplomb . . .”

A man falls to his death from the Tarpeian Rock. Did he really fall, or was he pushed?“His name was Gaibinus and he was a real stinker.”

Everyone agrees his death isn’t much of a loss and they hope he jumped, but one old woman swears she saw someone push Gabinus, and she won’t shut up.

It might’ve been hushed up, but there are a few complications. One is that the Emperor Domitian is returning to the capitol and Rome is readying itself for his triumphant entry. A murder investigation will definitely put a damper on the festivities and the Emperor won’t like that.

The other is that the Tarpeian is an important landmark, a place of sacrifice, part of the Capitol playing prominently in the Emperor’s celebration.

“Nobody wanted Capitol Hill to be defiled.  Jumping off a rock was the wrong kind of sacrifice.”

When the deceased is identified, things get worse; he’s the project manager for the Triumph.

Someone must investigate, and the dinar gets passed, finally falling to Tiberius Manlius Faustus, aedile, to find if someone really gave Gabinus a shove. Tiberius, still suffering from the effects of being struck by lightning on his wedding day, calmly foists the chore onto his beloved bride, Flavia Albia, daughter of Marcus Didius Falco, public informer (retired) now auction house owner. Flavia Albia accepts eagerly.

“No private investigator can compel members of the public to give evidence. For me, this is part of the fun. I must persuade them they want to talk to me.”

“Flavia Albia, daughter of Marcius Didius, wife to me, I love you. Please tell me I do not have to worry.”

I kissed him. “Manlius Faustus, you do not have to worry. I mean that.”

Flavia Albia will investigate, all right, and she’ll go back on her word to Tiberius, because that’s the way murder cases go. She’ll meet people who know her father and remember his methods of investigation, at which point she’ll offer this advice: “Never go into the same profession as your parents, unless you wish to be beset with people praising their talents.  Give up. You are no match for such much-loved characters.”

Falco maybe a much-loved character, but Gabinus was a much-hated one, hated by everyone from his brothers-in-law (for the way he treated their sister, his wife) to the seers studying the stars on the Hill.

No one liked him, some even applaud his dying. Flavia Albia’s investigations confirm those facts and digging into events on the days before his death only underscore his detestable character.

Actually, it seems she should simply leave well enough along and call it suicide.

Then another death complicates matters.

Anyone having read the Marcus Didius Falco mysteries will appreciate the tone of this series. For smart-mouthed retorts and sharp asides, Flavia Albia is a chip off the old Roman block. Her descriptions of various politicians, townsfolks, and even members of her own family, as well as the city of Rome itself are acidly hilarious.

Father Falco and his wife, the beautiful Helena Justina, make an appearance and are referred to often as Flavia makes her way through Rome’s crowded streets and busy marketplaces. The daughter doesn’t let comparisons to the father slow her investigation, however.

Like most children, she nods and pretends to accept advice, then does it her way.

Fashioning modern methods of investigation as well as other 21st century conventions into acceptable practices in the daily life of ancient Rome may sound like an insurmountable task, but author Davis does it with aplomb in such a way the reader will believe it logical and probably true.

The circuitous route to discovery is entertaining and sarcastically amusing as Flavia Albia with dog Barley, and occasionally husband Tiberius, in tow, plows her way through the tumult of the Emperor’s return to discover why Gabinus fell from the Tarpeian Rock and whether he was really pushed.

Applause all around for this Flavia Albia mystery!