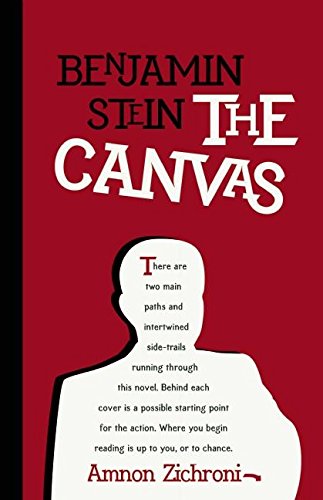 “The Canvas is an engaging read guardedly recommended to psychological mystery enthusiasts . . .”

Benjamin Stein’s The Canvas (whose German title can also be rendered The Screen) is a psychological mystery exploring the nature of memory and its importance to personal identity through parallel narratives presented in an unusual format.

The two sets of 11-chapter first-person narratives (22 chapters in all plus a glossary) tell the stories of two self-focused 40-something contemporary German speaking Orthodox Jews, Amnon Zichroni (whose surname is derived from the Hebrew word for memory), and Jan Wechsler.

Both narratives require suspensions of disbelief, both employ dei ex machina in the form of monetary windfalls, and both have disturbing yet disappointing endings.

Instead of a front cover and a back cover The Canvas has two front covers each of which is a possible starting point. Readers may begin with either narrative and read through to its conclusion in the middle of the book and then turn the book upside down and start again at the beginning of the other narrative.

Or they may alternate between the 11 pairs of chapters. Should The Canvas also be released as an audiobook, it will be interesting to see in what order the narrator chooses to narrate it.

Readers who prefer linear narratives should start with Amnon Zichroni’s story spanning three decades beginning in his early adolescence as the oldest son of a Haredi (separatist) Orthodox Jewish family in Jerusalem in the late 1970s from which he is banished for reading secular literature (Oscar Wilde’s The Picture of Dorian Gray). The story follows him to Switzerland where he is raised by his “uncle,” a Modern (integrationist) Orthodox family friend who becomes his guardian, on to the U.S. in the mid- to late 1980s for college and medical school studies and where he first employs his empathic gift: an ability to access other people’s repressed memories simply by touching their skin. Then as a psychiatrist he returns to Switzerland in the 1990s and eventually back to Israel where his story ends in 2008 shortly after he and Jan finally meet.

Amnon’s tale is an entertaining and engrossing read. It makes liberal use of traditional Jewish vocabulary. The narrative moves at a page-turning tempo—except for a digression about a medical school anatomy professor who in his own private practice has rejected western medicine in favor of its traditional Chinese counterpart. The professor’s example reaffirms Amnon’s religious distrust of rational science and validates his reliance on his gift, the very existence of which requires a suspension of disbelief on the part of readers.

Apart from a brief infatuation with his best friend’s fiancée in his young adulthood, Amnon’s lack of a love life or even arranged introductions and shidduch dates is never explained and a conspicuously missing element in what is in part a coming of age tale. Surely Orthodox young women would find an Orthodox from birth yeshiva educated young man with a prestigious profession such as Dr. Zicharoni a good catch.

But neither Amnon nor Jan have a clue how they other people perceive them. Readers might speculate whether such unmentioned women intuitively discerned in Amnon’s character flaws that would ultimately prove his undoing despite years of studying ethics and a lifetime of ritual observance.

Jan Wechsler’s story takes place in Germany, Switzerland, and eventually Israel in the weeks and months following the end of Amnon’s. His tale transpires over months rather than years. Jan recalls growing up Jewish in East Berlin (like his author Mr. Stein) and getting into trouble for trying to borrow a book of poems by e. e. cummings from the American embassy’s library, echoing Amnon’s getting caught with Oscar Wilde’s novel. In the present tense (2008) Jan is living in Munich, married, the father of two young children, and a book publisher.

Mr. Stein’s novel is inspired by and in part a fictionalization of Binjamin Wilkomirski's 1995 fraudulent Holocaust memoir, Fragments, in which Wilkomirski projected his traumatic working class Swiss gentile childhood experiences onto an assumed Eastern European Jewish identity along with memories of surviving the Shoah.

In The Canvas the Wilkomirski character is named Minsky, the journalist who exposed his true identity is named Jan Wechsler, and Minsky’s strongest defender is Amnon Zicharoni, who loses his psychiatric license and practice following allegations that he used his gift to access and encourage Minsky’s false memories.

This suggests Mr. Stein is aware of recent neuroscientific studies on the subjective nature of memory indicating the mental faculty with which we recall and reconstruct memories lies in the imagination.

At the beginning of the Jan Wechsler narrative, Wechsler begins to doubt the veracity of his own memories and identity when shortly after a trip to Israel the airline he flew on delivers a suitcase to his home which at first he insists does not belong to him.

In the suitcase are several of Dr. Zicharoni’s belongings including the copy of the Wilde novel as well as a copy of the book by Jan’s journalist namesake about the Minsky affair. Jan is intrigued by his namesake and tries to find out as much as possible about him.

Readers may begin to wonder whether the two Jan Wechslers indeed are the same man and whether the journalist who exposed Minsky unconsciously emulated Minsky’s amnesia by imagining a false East German childhood. Unlike Minsky, Wechsler’s Jewish identity is never in doubt; whether in East Germany or in Switzerland Jan grew up a secular Jew and became an observant one as an adult in Munich. His identity crisis threatens Jan’s marriage and with it the alienation of his children.

Skeptical readers may question Mrs. Wechsler’s credulity. Are we to believe she married the head of a boutique literary publishing house without doing her due diligence or meeting her future mother-in-law? The first time she hears her children’s grandmother’s voice is when she receives a phone call while Jan is away and is perplexed that the elder Mrs. Wechsler speaks German with a Berne rather than a Berlin accent. Mr. Stein never indicates what kind of German accent Jan has.

The endings of the two narratives are disappointing. They are also sad. It’s a pity Dr. Zicharoni can only see Mr. Wechsler as an adversary rather than as a fragile human being no less in need of empathy and healing than Mr. Minsky.

The Canvas is an engaging read guardedly recommended to psychological mystery enthusiasts, especially ones with strong Judaic studies backgrounds.

Because it requires suspensions of disbelief it will appeal more to readers who can focus on the larger picture without becoming preoccupied with the plausibility of particular details—as mystery readers tend to do.