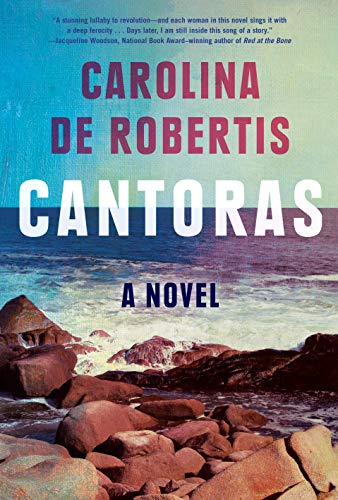 Carolina De Robertis is a writer of Uruguayan origins who currently teaches at San Francisco State University and lives in Oakland, California, with her family. She has written several novels in English and won prizes for them. Cantoras has been received with great acclaim from many reviewers and been nominated for more prizes.

Cantoras is a gem of a novel, shining in every creative facet. The skill with which author De Robertis weaves the story, not only of the five protagonists amid the bleak and joyless repression the Uruguayan authoritarian regime in the 1970s, but also how she counterbalances that repression with the group’s varied efforts of political resistance and the mystical power of their escape hatch, a shack on an isolated beach near Montevideo, is memorable. If this book were an opera, De Robertis would be deafened by curtain call after curtain call. It is, to say the least, a most memorable page turner that carries a siren call of hope. Circumstances, personal and political, even if they take years and sometimes decades, can and do change.

Cantoras sings many songs: of family, sisterhood, friendship, patriotism, love of freedom, love of nature, love of another . . . and the ravages of tyrannical authoritarianism on all lives. It is the narration of five women who create a family for themselves and their queer loves and lovers amid their individual struggles for identity and their collective arcs of political resistance. They create a “home” for themselves on a beach, Cabo Polonio, on the Atlantic coast, not far from the city where they live,

“The first time—which would become legend among them—they entered in darkness. Night enfolded the sand dunes. Stars clamored around a meager sliver of the moon.” . . . “They would find nothing in Cabo Polonio, the cart driver said: no electricity and no running water” . . . “They were stunned by the sand dunes, the vast life of them. The dunes rippled out around then, a sparse landscape, the landscape of another planet, as if on leaving Montevideo they’d also managed to leave Earth, like that rocket some years ago that had taken men to the moon, only they were not men, and this was not the moon, it was something else, they were something else, uncharted by astronomers. The lighthouse rose before them, with its slowly circling light. They approached the cape along the beach, the ocean on their right, shimmering in the dark, in constant conversation with the sand.”

The lighthouse, of course, will remind many readers of Virginia Woolf’s famous, semi-autobiographical novel To the Lighthouse. Indeed, there are echoes of Woolf’s writing in this novel’s structure, especially in the shifts of point of view from one to another of the protagonists’ inner lives causing scarcely a ripple on the smooth surface of the novel.

The sweep of Cantoras is vast, spanning decades with chilling insight into the regime’s worst human rights abuses and the psychological numbing of the protagonists’ ability to live their ordinary lives in the city within that cruelty. Amid the drabness of their daily routines, when together the women share their dreams of what freedom will mean. But there have secrets, too. Secrets of torture, and rape, and the dangerous work of being part of the Resistance,

“They had always thought that the end of the dictatorship would bring relief, even joy, that when the news came—if it ever came—the sky would open and sing blue. But it did not. It hung gray and exhausted outside her window, it was November, late spring, no sign of the summer to come. . . .” “Democracy. That word. She hadn’t heard it on the radio since her teenage years. The sound of it pierced through the fog of numbness. She wanted the man to say it again and again, wanted to hear it loud and slow, loud and fast, always loud, wreathed in a cackle of public airwaves.”

De Robertis’ prose is breathtaking, you gasp for more and more she gives you.  Her characters are fiery, devoted, flawed (like us all) sometimes with pettiness and ill-temper, but utterly convincing and fully alive. By the end of this magnificent book, we know them so well, we carry them with us wherever we go.