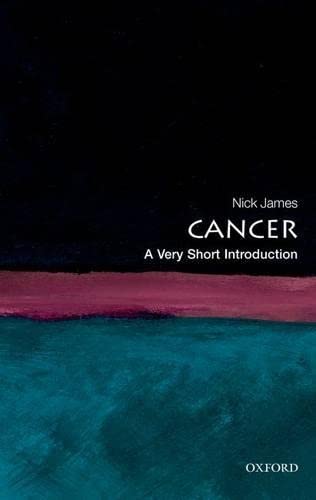 “Nicholas James has managed the impossible. In one short book he satisfies several different audiences well. He provides understanding for a new cancer patient, an overview for scientists who publish papers, and a resource for media staff who report on cancer—a mighty little book.”

Nicholas James, Ph.D., and Oxford University Press have collaborated to produce Cancer: A Very Short Introduction, an incredibly valuable little book. Dr. James packs accurate and useful information into this 4-inch by 7-inch paperback. He introduces cancer’s biology, its treatments—standard, alternative, and evolving—its methods of detection and diagnosis, and its economics.

Chapter after short chapter, Dr. James delivers thoughtful pithy sentences, rich in logic, that often elicit a laugh, or at least a smirk. In one section, he bemoans the susceptibility of cancer patients to unproven health claims of homeopathic remedies this way:

“Most people have only the most sketchy understanding of science and tend to view the claims of scientists and alternative practitioners as equally valid. This view is peculiarly limited to biology—no one wants to use alternative approaches to, for example, engineering or piloting an airplane; they stick with the laws of aerodynamics and trained pilots.”

When discussing the muddled results clinical trials have yielded concerning dietary supplements, he commiserates, “As with many things in life, what starts out looking quite simple, gets more complex the closer you look at it.”

He does make a common error when expressing statistics. He states, “In 2008, around 12.7 million people were diagnosed with cancer, of whom 7.9 million died.” But the cancer deaths in any given year obviously do not all come solely from the newly diagnosed population. This is excusable, though, because it is the only error in a book loaded with facts.

Dr. James brings clarity to patterns of breast cancer incidence by demonstrating that wealthier, better-educated women are at significantly higher risk than the less well off. He then predicts that the varying incidence rate patterns in different global locations have hormone changes as a common denominator, so breast cancer probably will increase in developing nations as their access to hormones increases.

While he considers prostate cancer as serious a health threat as breast cancer, he resigns himself to the fact that the shorter, less healthy lives of men, as compared to women, will continue to stem from the male’s “ostrich” approach to all matters related to health.

He lumps several other digestive tract cancer types into a discussion of cancers of the gut and shows that in Japan an increasingly Westernized diet is linked to a rise in bowel cancer, so “differences in the lining of the lower bowel clearly arise from what goes in at the top end!”

Dr. James also predicts the future as well as he summarizes the past. He aptly points out that evolving approaches in cancer diagnosis and treatment based upon genomics-analyzing technology will enable researchers to fully characterize the gene changes in cancer, but the work also may result in a traffic jam, because the number of cancer markers being developed may very well exceed the capacity of research teams to carry out the necessary trials.

And the economics of cancer is a difficult topic in its own right, yet Dr. James manages to condense it well without ignoring the major issues. His reflections, while based upon government-run health care system in the United Kingdom, are globally relevant because, at every turn, he asks the right questions: Why are costs rising yet this increase is not driven by new expensive drugs? How does a healthcare system make decisions about including a new treatment as standard care? How does it measure cost savings?

Nicholas James has managed the impossible. In one short book he satisfies several different audiences well. He provides understanding for a new cancer patient, an overview for scientists who publish papers, and a resource for media staff who report on cancer.

Dr. James finds it remarkable that cancer does not occur more frequently. In fact, he marvels that the body’s processes run so reliably for so many years in most people. What is also remarkable is how much excellent content Dr. James was able to pack into Cancer: A Very Short Introduction—a mighty little book.