You Can Stop Humming Now: A Doctor's Stories of Life, Death, and in Between 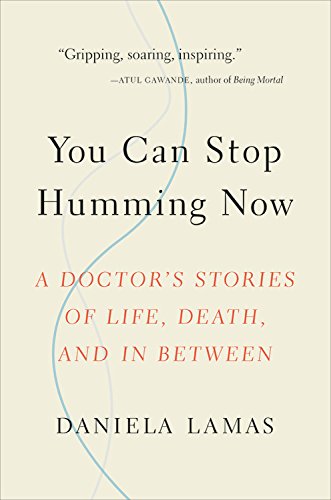 British author George Orwell once described hospitals as “ante-chambers to the grave.” It’s not difficult to understand why. At the age of 46, when he was a patient at University College Hospital in London, England, an artery burst in his lungs and killed him instantly. For years, he also suffered from TB.

Dr. Daniela Lamas would have found Orwell a fascinating patient.

In her new memoir in which she recounts how, why, where and when she became a doctor, she offers profiles of half-a-dozen of so patients who hover been life and death and sometimes suffer from hallucinations.

They are also places in which contagion can run rampant.

At times, it’s difficult if not impossible to say with certainty at any given moment which of Dr. Lamas’ patients are alive, which ones are healing and on the way to recovery and which ones are falling apart little-by-little and dying a slow but inevitable death.

So, it doesn’t seem fitting that in the afterword, Dr. Lamas explains that “this is not a book about death. . . . This is a book about life.”

Maybe it’s about both.

Understandably, the author wants to be up beat. Perhaps that’s the right note to sound at the end of a book that takes readers though case after case in which patients are, paradoxically, desperately ill but not in imminent danger.

Dr. Lamas is good on the subject of medical communication, or lack of same, especially between the doctor and the patient, the hospital and the world outside that’s inhabited by friends and family of the chronically sick.

In a November 12, 2015, op-ed piece for The New York Times, Dr. Lamas wrote, “good medical care relies on understanding, and understanding is all about language.”

In You Can Stop Humming Now, patients tell her about “struggling to communicate.”

Sometimes there’s little if any meaningful communication between the doctors in the hospital and the people they treat, and no one is really at fault or to blame.

In one situation, a patient says to a doctor, “you’re telling me I have a ticking time bomb in me.” Dr. Lamas adds, “She didn’t get an answer.”

Sometimes, the author herself wonders how patients and their families could conceivably use the information she might provide. Information isn’t necessarily beneficial. Telling the truth isn’t always the right course to take.

For Dr. Lamas, there are no iron clad ethical rules and no moral absolutes. When she looks into the future she sees a world in which “there will be no clear right or wrong.”

The outcome of a surgery or a procedure is often ambiguous, so “communicating about chronic critical illness” can be a minefield.

The battlefield analogy seems apt in a world in which civilians in their own towns and homes—and not soldiers returning from war—suffer from Post Traumatic Stress Disorder (PTSD).

Not surprisingly, doctors in the contemporary world are often regarded as poor communicators. After all, they usually don’t take classes in interpersonal messaging.

She also humanizes the people she writes about and is troubled when the nurses in one hospital refer to a room by its number and not by the name of the person inside.

The modern hospital is a technological hub and You Can Stop Humming Now describes the complex machines that keep the sick and the infirm alive and breathing, heart pumping and lungs working. Indeed, some of the patients in these pages seem more like bionic creatures than human beings, though Dr. Lamas never stops seeing them and treating them as kith and kin.

Readers who make it through this harrowing, albeit inspiring, book might want to choose Dr. Lamas as their primary care physician. She even makes house calls and befriends patients who reach out to her on Facebook.

The brief biography at the end, describes the author as a “pulmonary and critical care doctor at Brigham and Women’s Hospital and on the faculty at Harvard Medical School.” It’s good to know her professional credentials, and yet given the subject of the book, knowing her vital signs would have humanized her even more.

Why nothing about yoga and meditation in the Boston hospitals that pioneering both practices, and why nothing about her Cuban-born, Spanish-speaking father whom she describes in one of her New York Times pieces?

Dr. Lamas does let her guard down in the acknowledgements when she thanks her mother as her “champion,” “greatest fan and first editor.” Dr. Lamas’ mother, with “her pride and unconditional love,” sounds like the subject of another book. Meanwhile, one hopes that she’s as proud as ever about her daughter the doctor.