Camera Man: Buster Keaton, the Dawn of Cinema, and the Invention of the Twentieth Century 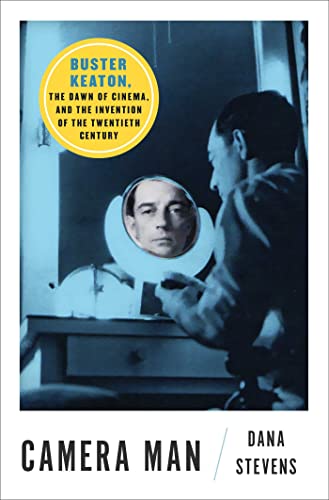 As the book’s subtitle indicates, Camera Man is not a conventional birth-to-death narrative of the life of Buster Keaton. Stevens’ aim is to use the story of Keaton’s life and career as a scaffolding on which to hang discussions of various popular cultural movements and phenomena that occurred in America during Keaton’s life, and which either affected him or reflected his experience. She regards Keaton as an emblematic figure whose films and personal history capture the spirit of the age in which he lived and worked.

This intent turns the book into a cultural history in which Keaton’s life story is just one thread in a larger fabric. It also leads Stevens to organize the book around topics and themes rather than a strict, easy-to-follow chronology. The result is a narrative with numerous discontinuities and redundancies into which Keaton frequently disappears, only to reappear again with the connecting links either missing or explained out of order.

Keaton’s career, like the career of other popular comedians such as George Burns and Joe E. Brown, straddled the main epochs of 20th century mass entertainment—vaudeville, silent movies, radio, talkies, and television. He also performed occasionally in legitimate theater, and in the circus as a clown. His talent—a genius for physical comedy—was flexible enough to allow him to adapt to these changing forms of entertainment.

He was born in Kansas in 1895 into his parents’ vaudeville family. Joe and Myra Keaton had him join their act when he was three. He came into the world when vaudeville was cresting, and when the motion picture, a new art form, had just been invented. He rode both of these vehicles to fame and fortune.

By the age of six , Buster had become the star of “The Three Keatons,” astonishing audiences with his unperturbed absorption of his stage father’s violence. The tension between fright and laughter that Keaton generated with his stunts became the signature of his method as a  performer throughout his silent film career. He embodied a kind of existential transcendence of the mayhem of modern industrial life, with its undercurrent of imminent disaster and its implications of absurdity.

“The Three Keatons” were a top drawing act on the country’s premier theater circuits until 1912, when Joe’s alcoholism drove them out of the business and shattered the family. Keaton seemed headed for a career on the legitimate stage, but a chance meeting with another vaudeville actor who was working for Roscoe Arbuckle brought him into the world of silent movies.

This transition launched Keaton on his most productive period as an independent filmmaker, writing, producing, directing, and starring in a run of short films and features that culminated with his most famous, and most expensive, silent film, The General. Though now acclaimed as his masterpiece, The General was not well received at the time of its release (1926), and its exorbitant cost put an end to his independence. Schenck moved him to MGM, where his creativity languished in formulaic, but profitable, studio pictures produced by Irving Thalberg.

In 1921 Keaton had married Natalie Talmadge, the sister of Joe Schenck’s wife Norma. With Natalie, Keaton had two sons, Joseph and Robert. In 1926, as his career peaked, he moved the family into an ornate 10,000 square foot Italian villa that he had built behind the Beverly Hills Hotel. There, he slept in a separate bedroom in deference to Natalie’s decision to remain celibate after the birth of Robert. Natalie turned her energies to shopping, spending thousands of Keaton’s dollars every month on her wardrobe.

In 1933 Keaton’s personal life and career collapsed. His unhappiness at home and at MGM had made him an alcoholic. Natalie divorced him, and Louis B. Mayer fired him shortly before the release of his final feature film for MGM, the aptly titled What—No Beer? After two short-lived production deals with other companies, and a stint in rehab at Sawtelle Veterans Hospital in Los Angeles, Keaton was rehired by MGM in 1937 as a gag writer.

Though his career as a performer seemed to be over, television rescued him. In its early years television programming adopted the patterns of vaudeville—variety shows with a mix of music, comedy, jugglers, and animal acts. The medium embraced Keaton. He had his own weekly program, The Buster Keaton Show, and appeared regularly as a guest performer on both variety shows and dramas. Later, as television moved from corporate sponsors like Texaco and Kraft to the sale of time slots, Keaton performed in TV commercials.

His personal life found footing when in 1940 he married Eleanor Norris, an MGM chorus dancer he met at a bridge game on the lot. She stabilized him emotionally, performed with him at the Cirque Medrano in Paris, and sustained his reputation after his death from lung cancer in 1966.

Although Keaton’s life story has many elements of pathos and drama, Stevens is interested in him primarily as a representative 20th century performing artist, a figure whose life coincided with a number of 20th century cultural movements. This angle of approach leads her to interesting but often scattered detours in which the reader loses track of her main character.

Her method of veering away from Keaton at every stage of his career into side paths continually interrupts the flow of his life story, often gratuitously. Thus, when describing Buster’s role in “The Three Keatons” she takes the reader on a side trip to the Society for the Prevention of Cruelty to Children whose founder, Elbridge Gerry, took a dim view of the Keatons’ act and hounded them.

The book is built around such digressions that often seem irrelevant to the central narration of Keaton’s life. Keaton’s drinking problem prompts a separate chapter on Alcoholics Anonymous and its founder, Bill Wilson, even though Keaton never joined AA. The fact that F. Scott Fitzgerald worked unhappily at MGM at the same time as Keaton, and was also an alcoholic, occasions a chapter on Fitzgerald’s career, even though Stevens has no evidence that Keaton and Fitzgerald ever met. Interesting as they may be as stand-alone pieces, these sidebars make the book feel jumbled and in need of more editing.

Stevens has done her homework. The book is deeply researched, including viewings of Keaton’s oeuvre, which she dutifully summarizes and analyzes, sometimes to the point of tedium. But her associative structuring yields a disjointed account that misses the opportunity to show how an important popular entertainer contained and expressed in himself and through his films the story of three quarters of a century of American life.

For what Keaton conveyed in both his personal life and his professional persona was an extraordinary stoicism and courage in the face of the bewildering complexity and speed of modern life, with its ongoing wars, its economic uncertainties, and its spiritually empty insistence on progress achieved through endless consumerism. And unlike Charlie Chaplin, his main competitor for comic laurels, Keaton never resorted to sentimentality to woo his audience. He rode the whirlwind of modern life with a poker face.