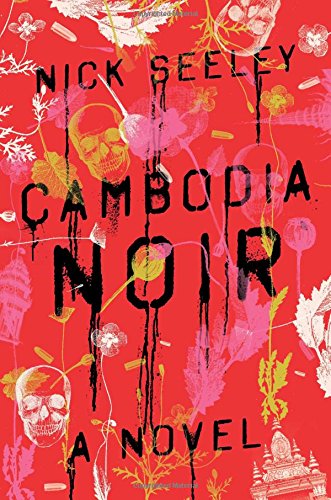 With that consumer alert out of the way, Cambodia Noir features ex-war photographer Will Keller in the topsy-turvy corruption and drug-infested chaos of Phnom Penh.

If you prefer a heavy injection of cynicism from your noir lead characters, Keller’s cup runneth over. If you expect your noir to move forward on a cool glide of fact-finding and understated exchanges led by a seen-it-all sleuth, seek elsewhere. The definition of noir is certainly in the eye of the beholder, but Keller gets through his bleak days on a fuel of cocaine, whiskey, yaba, joints, and whatever is available in the consciousness-altering trade out on the garbage-filled streets.

When we meet first Keller he’s tumbling out of bed at 5:00 a.m. and “fighting, kicking, clawing my way back through last night’s whiskey and cigarette tar and dirty sheets.” His scooter driver Prik “drives like he’s found a way off this rock,” and they rush to a neighborhood drug bust where a grenade explodes. The scooter crashes and they check their wounds amid gunfire.

Still focused on doing his job, Keller realizes he needs to focus on his work—getting the shot—and to stop thinking about (salivating over) the ten kilos of junk the cops have just turned up in the raid.

Keller is not your ordinary journalist, and this is no ordinary newspaper. He snorts cocaine with his cohorts in the newsroom. He slips roofies to interview subjects when he needs information or wants them to forget what they might have said or done. And he approaches each day with a search for the perfect chemical balance.

Then comes along the beautiful dame in need of some help. In this case, one Kara Saito. “She steps next to my table, watching me the way a Vermeer watches you.” Kara’s sister June is missing, and she needs someone who will go look for her “quietly.”

And it turns out the missing girl is one of the interns from the newspaper where Keller works. Amid June’s left-behind stuff is a diary whose entries provide Keller a few breadcrumbs for the search.

Nick Seeley keeps the pace cranked up. The writing is crisp and edgy, staccato. Occasionally, it’s also wickedly funny in that wry, dry tone that echoes classic noir.  “Off in the corner a group of singers in neon latex dresses are belting out the top hits of the eighties in Thai, accompanied by a Filipino with Metallica on a vintage Casio. They’re on ‘Uptown Girl.’ If Billy Joel doesn’t already have a smack habit, this would give him one.”

Trying to remember what June looked like, Keller realizes her face is growing fuzzy, “a picture thumbed too many times.” A hotel room “looks like the cold storage in a morgue and smells about the same.”

Every other chapter is an entry from June’s diary, which gives Keller some obtuse tidbits. If he could only stay sober long enough to read the whole thing at once, well, Cambodia Noir might be a Lydia Davis short story. It turns out June is a good writer so her diary entries are sometimes long and evocative. (Seeley does a nice job contrasting Keller’s voice with June’s.)  She writes, she says, “in lieu of exorcism” but fails to jot down exactly what she’s planning or doing.

Still, when Keller isn’t digging in his bag for a shred of weed or shaking off the latest hangover, Keller keeps reading. “June’s story has no ending. It’s not even clear where it stops: she’s writing over the same pages again and again, like a Renaissance painting reusing old canvases.”

The funny lines keep coming. Keller is a self-loathing piece of substance abuse work. The story is frequently crude, sometimes brutal. As secrets are revealed, Seeley does little hand-holding and offers no cheapie recaps. Readers are expected to keep up. As with many scenes before it, the ending is frayed and untidy; noir doesn’t mean black and white.

Noir knows no boundaries, as detectives from Scandinavia to outer space (Warren Hammond’s fine KOP trilogy) have made clear. Given Seeley’s vibrant descriptions and all the dark corners Keller uncovers, Cambodia is as good a place as any for a journey to the heart of drug-fueled noirness.