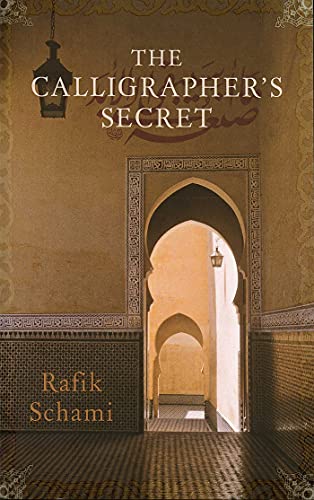 Suspensful, spectacular, and searing are not adjectives one would use to describe The Calligrapher’s Secret. Intriguing, intelligent, and multifaceted are far more accurate to convey what readers can expect from this well written story about love, art, family and Syrian culture.

The primary characters in this historical, yet contemporary novel are Hamid Farsi (the calligrapher), Noura (his wife), Nasri Abbani (wealthy philanderer) and Salman (the calligrapher's apprentice). The detail Mr. Schami provides for these men and women is quite astounding, as it is for the minor players as well. Each of their personalities, characteristics, family life, childhood experiences, and cultural and political influences that shape and affect them is presented with precision, empathy, and nuance. The beauty of these descriptions is both a blessing and a curse, as some of the backstory and pages devoted to such, become a little tedious and occasionally divert attention from the protagonists.

The author is quite adept at setting a scene and taking you for the ride. It’s as if you are peeking inside your neighbor’s kitchen or bedroom and seeing and hearing every intimate detail of what is happening through their eyes. Place, time, and events are also highlighted with powerful metaphors. When a mason hears of his son Jirji being beaten by a teacher at school, his anger and fury is described as, “He closed his eyes for a second, and saw a fine rain of burning needles against a dark sky.” After falling in love, it is said of Noura that, “From that day on, time flew past as if it were made of pure ether.”

An additional delight of The Calligrapher’s Secret, as well as interesting history and insight into calligraphy, the wearing of the veil and the Arabic alphabet, are the glimpses into Damascene and Syrian life in the 1950s and some of the customs, undercurrents and unspoken realities of the time (and today). “Faizeh told Mahmoud the butcher and her neighbor Samira in confidence that Salman was working as a chef in Kuwait for a good salary. ‘But that is strictly between our selves’ said Faizeh in conspiratorial tones. In Damascus, that was as good as a request to spread the news with great speed, and Mahmoud the butcher and Samira did valiantly.”

Mr. Schami’s writing shines with characters that embody and are shaped by gossip, misinterpretation, misunderstanding, secrets, and truths layered individually and collectively to create a story that should be savored and taken in at a leisurely pace. The end of the story is also a beginning—and includes a touching surprise.