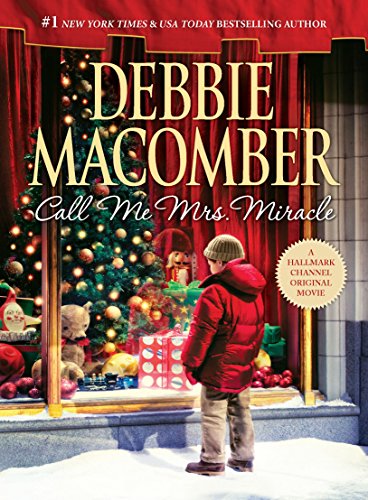 After last year’s overwhelming success with not only her book, Mrs. Miracle, but also the Hallmark Christmas movie, Ms. Macomber has come forth with this sequel, Call Me Mrs. Miracle.

Emily Merkle is working at Findley’s, a New York family-owned store for the holiday season. Human resources mistakenly misspells her name badge “Mrs. Miracle;” nonetheless, she decides to use it rather than have it corrected.

Jake Findley, the owner’s son and manager of the toy department where Emily is assigned, doubts the elderly woman under his supervision can handle the demanding job. But, after a somewhat contentious discussion with his dad J. R. over an expensive electronic toy he ordered, Jake is overjoyed when Emily states she is convinced the toy will put their store on the map. However, for Jake, this toy could make or break the store. If it does not sell, his future hopes of following in his father’s footsteps—as well as the future of the store itself—could be down the drain.

Twenty-one years ago when Jake’s mother and sister were killed in an accident on Christmas Eve, J. R. has only looked at Christmas for the sales it brings to their store, and refuses to celebrate the holiday. For practically all his life, Jake has seen his father systematically try to erase the holiday’s existence—except when it came to toy sales, of course.

Holly Larson, guardian to her eight-year-old nephew Gabe, feels she needs a miracle. Gabe’s mom died when he was a baby and his dad, Mickey—Holly’s brother—is now on active duty with the National Guard in Afghanistan. Not only that, but their retired parents are volunteering their medical talents in Haiti, so Holly is feeling overwhelmed, not only with caring for her nephew, but also from dealing with an unreasonable and demanding boss, and trying to meet extra expenses.

Holly and Jake accidentally meet in a coffee shop. After she orders her daily dose of caffeine and realizes she gave the last of her change to Gabe for his lunch, Jake performs a good deed by paying for her. When they part, he finds he cannot get her out of his mind. Later when she brings Gabe to the store to see Santa, they both feel an attraction. Emily, of course gives her own nudge to get the two together.

What will Emily do to make this a miraculous Christmas for everyone? Will Jake and Holly get together? Will Jake and J. R. ever let go of their sorrowful past?

As usual, Ms. Macomber fills Call Me Mrs. Miracle with heartwarming prose. It is easy to re-envision Doris Robert’s role as Emily Merkle in the movie while her well-thought-out character fills the pages with Christmas wonder.