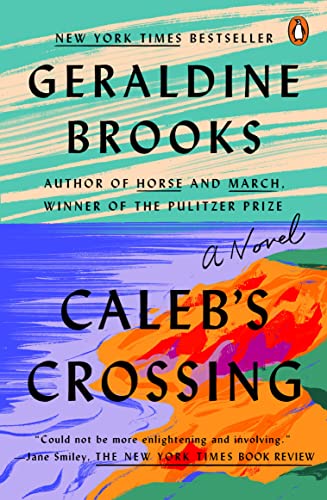 Caleb Cheeshahteaumuck, the protagonist of this elegiac novel about the early days of the Plymouth Colony, was an actual historical figure, a Native American nephew of a powerful Wôpanâak medicine man. Seeing the English pour onto the shores of his island—later known as Martha’s Vineyard—he left his tribe for the opportunity to attend the college that would soon become Harvard. History reports that he succeeded academically, tackling a curriculum heavy in Latin, Greek, and Hebrew. All other details of his four-year stay are a mystery.

Geraldine Brooks makes an effort to fill in the blanks in this wistful novel, brimming with respect for this unique individual. She narrates Caleb’s crossing between cultures through the eyes of the fictional Bethia Mayfield. The daughter of the island’s minister, Bethia meets Caleb not long after her twin brother dies. While Caleb teaches her where the wild fruits grow and where the best clamming beds are, she teaches him how to read.

Inevitably, they talk about the subjects that divide their peoples. Bethia, like Caleb, is an unusual creature of her religiously conservative time—hungry for the learning offered so freely to her brothers and willing to inwardly question generally accepted wisdom. Although occasionally the conversations between these two veer wincingly toward clichés (Damn you, Disney Pocahontas!), the author pulls back. Even the most narrow-minded of characters prove capable of growth and redemption.

The book is written as Bethia’s account, scratched out at night by the light of a tallow candle on papers discarded by others—mostly scholars, as, in a clever twist, Bethia is hired as a scullery maid to the school that prepares Caleb for entrance exams. This gives her the opportunity to watch him with the other students. Though the use of a displaced narrator veils the details and extent of his true troubles, Caleb's difficulties are cleverly mirrored by the prejudices Bethia faces as woman with so little control over her life.

Ms. Brooks’ strengths are on proud display: The young Massachusetts Bay Colony is vividly portrayed, from the natural beauty of the island to the squalid streets of the mainland villages, and the characters are deep-thinking, well-rounded creatures. Alas, in a story concerning a relationship between a boy and a girl from different worlds, there are some unfulfilled expectations. And, bound by the historical record, the narrative lacks a certain sense of rising action.

Caleb’s Crossing is a poignant book. It is a fitting sadness, for just as Caleb always suspected, his powerful uncle predicted, and all contemporary readers will know, what happens to Caleb and his people is a terrible tragedy.