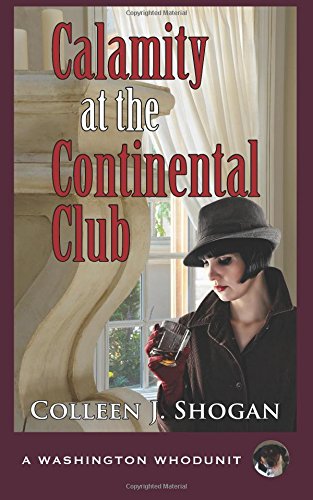 It’s hard to believe there is crime in Washington, DC’s upper crust society, but Colleen J. Shogan’s Calamity at the Continental Club brings it front and center.

In the third of the Washington Whodunit series, Shogan’s protagonist, Kit Marshall, attends a meeting of the Mayflower Society and comes face to face with two disasters: her impending mother-in-law’s plans for the perfect, albeit expensive wedding; and murder.

Kit’s future in-laws, Winston and Buffy Hollingsworth are wealthy New Englanders with a love of history and their own ancestral story dating back to the beginning of the country.

As the story begins, Kit and her fiancé, Doug, join the Hollingsworths for an evening of historical envy at the Continental Club. Winston has his sights set on becoming the president of the society, but tycoon Grayson Bancroft plows enough money into the organization to guarantee his ongoing position as president.

The evening festivities bring out the major players at the society: Frederick Valdez, a cellphone magnate and his wife Lola; Cecilia Rose, author of steamy romance novels and her husband, Drake—two decades younger than she; James Mansfield, professor of American History at Yale, and a competitor of Doug Hollingsworth, history professor at Georgetown. Not in the picture yet is Grayson’s wife, Kiki.

The relationship lines immediately begin to blur as Grayson is Cecilia’s publisher and they have a history; Mansfield and Grayson’s wife, Kiki, have a history; Valdez was cheated out of a program by Grayson; Winston Hollingsworth’s nose is out of joint due to Grayson’s handling of the Mayflower Society.

The evening is not contentious, but a series of one-upmanship challenges played out between the players.

The next morning, before the Society’s trip to Mount Vernon for a healthy dose of history, Kit rises early to take her run around DC and on her way out of the Continental Club, she encounters a sight she did not expect: Grayson Bancroft’s very dead body.

Kit is no novice when it comes to solving crimes, but this one is especially irksome. Upon discovering the body, she sees a small puncture wound on the side of Grayson’s neck. When the police arrive and start their investigation it does not take them long to determine that the one person who had access to a possible murder weapon is Winston Hollingsworth, Kit’s future father-in-law and a diabetic with a supply of insulin and syringes.

Kit and her friend, Meg, immediately put their detecting skills into overdrive as they uncover a multitude of motives that can put others in the spotlight. But everything is circumstantial. Doug, who normally refrains from participating in Kit’s investigations, is drawn into this one with a major goal: to prove his father innocent.

As Kit and Meg and Doug dig deeper, Trevor, a fourth party joins the investigation. More relationship glitches as Meg and Trevor each have a deep dislike of the other. Add to this mix of investigators, Kit and Doug’s cute little beagle mutt, Clarence, who adds his own take to the problem, and you have a fearsome tribe of crime solvers.

As motivations become more apparent and clues bubble to the top, the team all agrees that the most likely suspect to have killed Grayson is his wife, Kiki, who shows up the day after the murder. The only problem is that she was in Florida when he was killed, so motive not withstanding, proving their theory is problematic. And only made worse when Kiki is found murdered.

Their investigative skills honed to a fine point, the team is now forced to regroup and rethink their theory. And that they do, bringing the true criminal to task.

Calamity at the Continental Club is a fun read and moves fast. Shogan injects humor into the story, through the first-person thoughts of Kit Marshall. The ending feels a little too convenient, although not unacceptable, and the book is a good read.

Shogan, familiar with the Washington, DC, museums and restaurants, freely shares her knowledge, bringing the reader more closely into the settings.

For those who enjoy a quick read with a satisfying ending, put this on your shelf!