Cain’s Legacy: Liberating Siblings from a Lifetime of Rage, Shame, Secrecy, and Regret 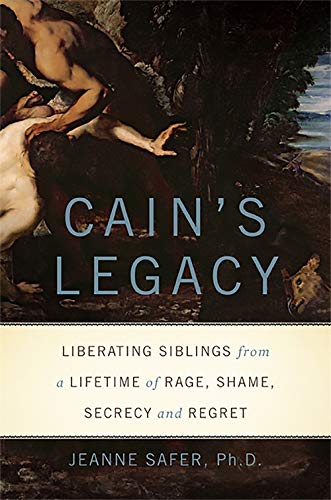 “If you have siblings, you might want to buckle up, because more than likely it’s going to be a bumpy life. If you are an only child, take some solace in learning to paddle your own canoe right from the very start.”

Sibling relationships are like the third rail of a family: when they work, everything runs smoothly, but if problems develop, just going near them can result in extreme harm.

Psychotherapist Jeanne Safer’s Cain’s Legacy is highly recommended for those who want to think about siblings in a new way, as well as get critical insights into the area of sibling strife, its causes, and potential remedies.

Dr. Safer digs deep into the world of sibling strife and makes this complex, emotionally charged area accessible to the reader through exceptional organization and conceptual clarity. Cain’s Legacy is based on case studies, insights from her own professional practice, and interviews of 60 siblings ages 26–83. She casts a wide sibling net, including feuding egret siblings in the animal world; the “siblicide” of the Indian rosewood tree (the first pod kills all the rest); and the legendary biblical pair, Cain and Abel, to name just a few.

Dr. Safer sets her context at the beginning of Cain’s Legacy. She reveals that at least one-third of the adult siblings in the U.S. suffer “serious sibling strife” and that “instead of feeling kinship and warmth for their nearest relatives, these brothers and sisters feel secret shame, rage, guilt, resentment, alienation, contempt, or worst of all, more cold indifference than a stranger could ever invoke.”

She makes the case that “sibling strife” is nothing like the “normal fighting between brothers and sisters who basically get along. These opponents never make up; there is not enough goodwill to counterbalance their perennial grudges.” And while “parents are responsible for converting sibling rivalry into sibling strife in the first place . . . it is the siblings themselves who perpetuate it.” It’s often the case that brothers- and sisters-in-law don’t help, either. A person measures their life against their sibling(s)’ from the beginning until the end.

In other words, siblings are important.

Eighty-five percent of Americans have siblings, and unlike parental relationships which last between 30–50 years, sibling relationships last longer than any others: 50–80 years is the norm. Dr. Safer keenly observes that “our first peer relationship has the deepest roots of all, and you can’t get a divorce.”

The sibling relationship is the blueprint for all subsequent adult relations, including marriage and work, and sets the stage for the relational dynamics of future families. So if you’re wondering why that marriage did or didn’t make it, why you do or don’t work and play well with others, and why your kids are or aren’t well adjusted, then realize that at least in part, the relationship with their brothers and sisters led the way.

Cain’s Legacy drives home the point that siblings are omnipresent because communication is not limited to obligatory holiday meetings; there’s the potential to interact 365 days a year. Hence “strife-ridden siblings have a morbid fear of the telephone” which Dr. Safer describes as an “instrument of torture” without caller ID. Whether or not the call happens, the sibling is on the hook either to have the conversation or feel obligated to initiate one. This is a lose-lose situation.

Add this to email, texting, and social media, in which siblings can appear out of nowhere, sending innocuous greetings or the most critical information as if it’s a laundry list. Already blocked a sibling on Facebook or added their email address to the spam filter? Many have. The ever-expanding pathways of communication cut both ways in sibling strife—a particular area which does not get enough attention by Dr. Safer.

But while Dr. Safer has dropped feuding siblings into an emotional soup, she also tries to get them out. Getting out of sibling strife isn’t easy—and the deeper the hurt/misunderstanding/dislike goes, the more difficult a positive exit.

Among the Seven Rules for Sibling Reengagement is to try to understand a sibling independent of your relationship with him or her in order to give a new perspective on the situation, accentuate admirable character traits, and look at the conflict from the other side. Reconciliation must be a mutual effort.

Difficult? Yes. Impossible? Sometimes. There is no medical prescription, no easy way out, as Dr. Safer reveals the long and significant estrangement from her own brother. For many, there is no reconciliation. But she encourages siblings that whatever the relationship decision is, to “make it a conscious choice” so there will be fewer regrets later on.

Cain’s Legacy would have had a bit more color with a slightly larger subject context. How siblings on the world stage have handled competition, success, and failure would provide more depth to her analysis of severe sibling strife as part of family businesses. The Bronfmans and the rise of the Seagram’s empire would provide a rich generational sibling inquiry. Another larger than life example of sibling strife is the royal abdication of England’s Edward VIII in favor of his brother George VI in order to avoid a national constitutional crisis.

If you have siblings, you might want to buckle up, because more than likely it’s going to be a bumpy life. If you are an only child, take some solace in learning to paddle your own canoe right from the very start.