Caesar's Greatest Victory: The Battle of Alesia, Gaul 52 BC 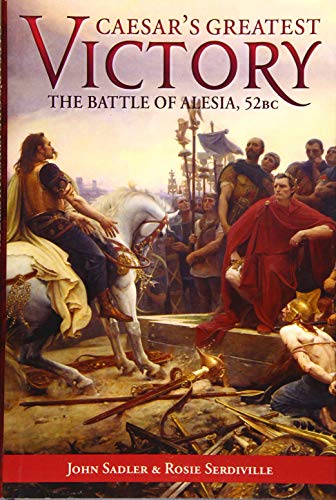 Long before his rendezvous with the Ides of March, 44 BCE, Julius Caesar was one of the ancient world’s most accomplished military leaders. Between his campaigns in Britain and Gaul, he was on track, he hoped, to emulate if not surpass the success of another famous commander in world history, Alexander the Great, conquering the known world to spread Roman civilization far and wide. If this helped his political and financial fortunes, so much the better.

His campaign in Gaul, culminating in the Battle of Alesia, against one who is considered the first great Gallic national hero, Vercingetorix, was a masterpiece of the art of siege warfare. Point of fact, his victory at Alesia was unique in the greater history of warfare in that his army was forced to fight between two walls of defenses against enemy forces; those he had surrounded and those coming to their relief.

Initially, criticism of this book was thought merited as its first half was more than just setting the stage for the account of the final battle and its aftermath. Yet upon reflection, the first five chapters not only set that stage but also necessarily describe, and familiarize readers with, Gallic culture, customs, society, weapons, and way of life along with Caesar’s career development and definitions of Roman weapons and engineering technology.

Included as well are descriptions of other various relevant tribes of Gaul and the effect on the campaign of those Germanic tribes from across the Rhine River, the then-ostensible border between civilization and barbarism.

Caesar’s list of objectives in conquering Gaul was more than just a matter of personal prestige, improved financial fortunes (he was heavily in debt as a rule), and leverage against political enemies in Rome. Also to be considered was Rome’s civilizing influence, increased trade with other parts of the Mediterranean world and means of keeping the barbarians at arm’s length. Rome’s sack by Celts in 390 BCE was foremost in the minds of many citizens.

The book’s last four chapters describe Vercingetorix’s strategy of attrition and scorched earth policy in avoiding a pitched battle, considering Roman tactics, and previous combat experience, account for the progress of the campaign in the years previous to the finale, Caesar’s bottling up the Gallic army and then the description of the Battle of Alesia and its results.

As mentioned above, this event was rather unique. After constructing defenses to keep the Gallic army surrounded in its mountaintop fortress, Caesar also had his army build a second ring of defenses which, ultimately, prevented a huge—if the sources are to be believed—outside Gallic relief force from raising the siege and handing him his first significant defeat, an event which would have been politically damaging, among other things.

In the end, the relief was defeated and the surrounded Vercingetorix and his army were eventually forced to surrender, ending the campaign and putting Caesar in the driver’s seat, so to speak, to subdue the rest of the province.

The authors’ bibliography makes considerable use of primary documents, from Tacitus to Plutarch and, of course, Caesar’s own “publication” The Gallic War. But as the authors warn, much of the information provided by these sources should be taken with a grain of salt as Caesar wanted to put the best spin on his accomplishments and the other ancient historians were sometimes writing hundreds of years after the fact.

Secondary sources are employed to describe the history and life of the Celts and other tribes mentioned in the text and contemporaneous Roman history leading to the main topic.

Two appendices provide a glossary of terms, their definitions, and information on a battlefield tour of the area if one should find oneself in central France.

Although not the first, last, or definitive word on Caesar’s Gallic Wars or Alesia, and in spite of the use of some British colloquialisms and personal interjections by the authors in the text, this is a good account of one of the most decisive battles of the ancient world.

Who knows how world history would have proceeded had Caesar been defeated?