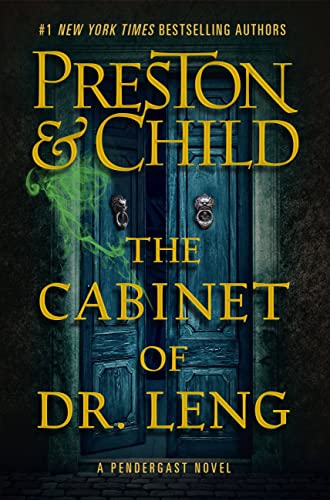 The brilliant duo of Douglas Preston and Lincoln Child began their collaboration with Relic (1995), one of the greatest thrillers ever written and the first featuring FBI Special Agent Aloysius Pendergast. The Cabinet of Dr. Leng is their 21st outing in this series and continues a subset of book(s) within the group. As with every Preston and Child book, prepare to be astounded by these two authors who know everything about everything and take pleasure in displaying their encyclopedic mastery of history, paleontology, gems, architecture, Indian art, absinthe cocktails, and myriad sciences, much to the reader’s delight.

One hallmark of a thriller is to zoom the protagonists around chasing villains, and this book is the epitome of action. During the present-day sections, the plot zips between New York City (with a reprised visit to the New York Natural History Museum); South Dakota’s Pine Ridge Reservation, where a Lakota man, an expert creator of tribal art, has been murdered; and Ecuador, where the killer has fled. FBI Agent Coldmoon, half Lakota, becomes suspicious that Sitting Bull’s peace pipe in a museum is a fake and related to the death. He flies to the New York History Museum to investigate, contacting his colleague, Pendergast, and Pendergast’s associate, NYPD Lieutenant Commander Vincent D’Agosta.

But why restrict the story to the present when the plot can be doubled?

Constance Greene, Pendergast’s ward, has traveled back to 1880 and her New York City impoverished childhood, via a parallel world entered through a strange cabinet. She is desperate to rescue her destitute sister Mary and brother Joe before they die and to murder the serial-killer surgeon Dr. Enoch Leng, who fatally experimented on Mary, producing an elixir that ironically allowed Constance to live over 100 years (she was born in 1871). To finance her revenge on Dr. Leng, she’s sold some world-class gems at Tiffany’s, assumed the guise of a wealthy duchess, and has acquired a Fifth Avenue mansion and an imposing bodyguard.

The evil Dr. Leng, who is distantly related to Pendergast, has been removing street girls from the House of Industry, ostensibly to provide care and treatment. In fact, the surgeon is harvesting the cauda equina in each in order to create a serum to increase age longevity. In the process, however, the women die. Because they are orphans, no one misses them, but Constance is the sole survivor and vows to prevent Leng from continuing his lethal experiments.

When Constance plummets into 1880, Mary has been captured by Dr. Leng. Constance must save her before her surgery and also quickly free Joe from prison on Blackwell’s Island before he suffers permanent psychological and physical harm. The clock is ticking, but unbeknownst to Constance, Dr. Leng suspects her purpose and identity.

Worried for her safety, Pendergast and D’Agosta secretly follow Constance to 1880. Pendergast, an eerie character, is described as having a pale face, “smooth, cool, and chiseled as marble.” He has suffered “a deeply emotional trauma” when Constance abandoned him and “used the machine to launch herself back into time.” This is a man who is always immaculately dresses in black suits, has elegant manners, and owns a museum-like house with mysterious rooms—one hiding a time-travel cabinet.

As if these urgent situations weren’t sufficient to hook the reader, what happens if the machine malfunctions? The more often it’s used, the more likely the user might be permanently stranded in a parallel universe, of which there are many “constantly shifting in space-time” so “that it might not be possible to find the right one again.” The authors offer impressive details about the machine’s inner workings and display their erudition about physics, engineering, and quantum mechanics—all the while folding these sciences into their Twilight Zone imaginings.

The portrayal of 1880s Manhattan is prodigiously realized. Who knew that tiny albino eels wriggled in puddles in the unused Cow Boy Waterworks? Or that the windows in the private examining rooms at Tiffany’s all faced north and its gem experts only met sellers before early afternoon, otherwise “the light would be insufficiently white for accurate evaluation.” Hundreds (thousands?) of these fascinating nuggets are salted throughout without encumbering the nimble plot.

The Cabinet of Dr. Leng is a propulsive read, stuffed with danger, diverse characters, dark labyrinthine tunnels, dank prisons, macabre laboratories, and opulent Fifth Avenue mansions. It includes a sensual portrait of New York City in 1880 that dazzles with its historical accuracy and descriptions of the odors, muddy streets, and cacophony of sounds, plus portrays its poorest denizens struggling to live and the high society holding their elaborate entertainments. The scenes set on the Pine Ridge Reservation are also perfectly rendered.

Preston and Child have created another masterpiece. The only caveat is that the ending isn’t conclusively tied up, i.e., the story carries over to the next installment, which is promised soon. While it’s challenging to create a self-contained novel amid a long series, the failure to do so may frustrate some new readers. The previous work, Bloodless, seems to flow into this book, so starting with it might be advisable. Better yet, begin with Relic. No scarier book has ever been created in contemporary literature. And delve into the authors’ other series and stand-alone works written together and separately. In other words, clear your shelves and get ready for some sleepless nights.

Laury A. Egan is the author of four psychological suspense novels, including Doublecrossed and A Bittersweet Tale. She has written six other books and a story collection