Cabin: Two Brothers, a Dream, and Five Acres in Maine 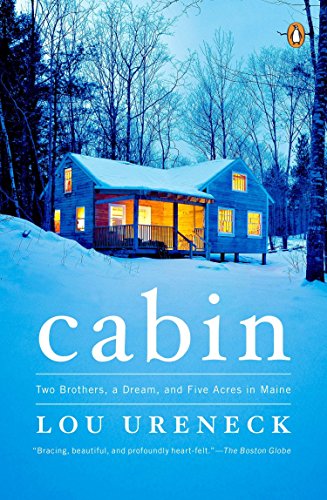 “Cabin is a journey into one man’s heart and soul as he rediscovers himself, his worth, and his family.”

Life offers many obstacles and challenges, and it is not unusual when one is standing on the threshold of the sixth decade to question the roads they have taken and the obstacles endured. Lou Ureneck should know.

Living in the city of Boston, Lou reviews his life from his childhood in southern New Jersey. Always a lover of the country, he finds himself suffocated in his metropolitan existence. After the death of his mother, the end of his marriage, and other difficulties, he finds himself at a crossroads: wanting the serenity and peace that for him only nature can provide.

When melancholy and regret hit hard, Lou changes the course he is traveling. He purchases a five-acre tract of land in western Maine, determined to take control of his life by building a cabin—a sanctuary to salve his soul.

Lou’s somewhat estranged younger brother, Paul, had helped him build his family’s home several decades earlier, so Lou calls upon Paul for assistance with his new endeavor. Paul willingly agrees, and along with Paul’s sons, the men commence their journey to Maine to help construct Lou’s retreat. The brothers soon find themselves bonding in a way they had not since their childhood. Lou and Paul had been shuffled around from one residence to another as children, while their mother raised them as best she could. Perhaps Lou is planting the roots he never felt he had. Paul and he learn to find and accept each other again in ways only once-close siblings can.

The essence of this moving tale digs deep into nature and architecture as Mr. Ureneck develops his rustic hideaway while constructing his post-and-beam cabin. He regains joy and a new lease on life using his bare hands and his brawn to make a dream a reality.

The prose is not only interwoven with colorful similes and metaphors, but also with the back stories of his youth, along with interesting historical facts regarding the state of Maine—all aspects that make this book thoroughly interesting as well as emotionally uplifting. Cabin is a journey into one man’s heart and soul as he rediscovers himself, his worth, and his family.