The Cabin on Souder Hill 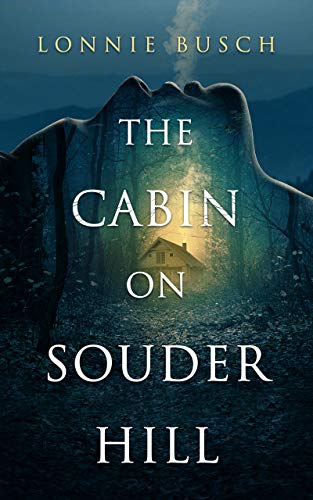 “‘Life is like a book, each page a different possibility, a different reality. One must only know how to turn the page.’”

Attempting to reconcile their crumbling marriage, Michelle and Cliff Stage spend time at their vacation cabin in the North Carolina mountains. Things are going well, if a bit strained, when Cliff sees a light coming from below them and hears people talking. Angered because he bought the cabin specifically for its isolation, Cliff goes down the hill to confront the intruders.

When he doesn’t return, Michelle phones the sheriff.

A search by ground and helicopter finds nothing. During that time, the sheriff tells Michelle about the cabin’s former owner, Pink Souder, for whom the road on which the house sits is named. Pink, a local real estate agent, was the son of a witch. Accused of murdering his wife, he and his mother vanished.

“They had this whole place dug up,” the sheriff said. “Holes everywhere. The state police boys were convinced Pink had killed Isabelle and buried her on the property, but they never found her. Wasn’t long after that Mattie and Pink disappeared.”

The sheriff plans to continue the hunt in daylight, but Michelle can’t wait. After he leaves, she goes down the mountain, finds the house Cliff was looking for, and goes inside—only to discover Cliff and the sheriff waiting for her.

It seems Michelle was the one who wondered off and her husband and the sheriff have spent the past 24 hours looking for her.

Though this world is in some ways better than the old one, it’s also somewhat worse, for in this one, Michelle’s daughter has died in a car accident. Michelle’s confused protests that Cassie is alive and Cliff is the one who was lost as she recounts her conversations with the sheriff—who denies they’ve met before—gets her admitted to the psychiatric wing of the local hospital.

“Anytime she thought Cliff’s reality might be the only one, the right one, she lost all energy for life. A voice came back into her head, One reality per person, that’s all you get.”

Dismissed from the hospital, Michelle is determined to get back to her own world, but in order to do that, she needs help. Thus, she seeks out Pink Souder and his mother, who no longer exist in her world. She pieces together the mystery of Pink’s disappearance and how the necklace she found in the cabin helped transport her, but that doesn’t explain the visions she keeps having of a young woman in water.

When Pink’s mother agrees to use her witch’s skills to return Michelle to her own reality, she confesses the secret of an event happening years before, and how its consequences brought her and Pink to this world, and, accidentally, Michelle, also.

Mrs. Souder asks only one thing: That Michelle take Pink with her. Michelle agrees, and by doing so, paves the way for tragedy and an eventual, if unsettling, justice.

This novel could easily be classified as a psychological mystery, paranormal suspense, or even a time travel thriller. Whichever genre the reader wishes to place it in, it has a cast of characters worth remembering, and the foremost of these is Pink Souder.

Pink describes himself as a “real estate agent with a weight problem and a weird name,” but he’s more than that. A “wayward cherub with undeniable charm,” he’s a character whose actions should make us hate him but he’s so good-natured and oblivious to his own faults, everyone can’t help liking him instead.

While initially seeming to be just another “good ol’ boy,” Pink evolves as the reader learns more about him, until by the end of the novel, he’s a truly sympathetic figure, an innocent cast into an unknown situation by the well-meaning but callous acts of others as they actually attempt to protect him.

Michelle is a strong woman in her own right, quick-thinking and holding her own well in an insane situation, and several of the others are memorable, but in Pink Souder, author Busch has created a character the reader will be touched by and won’t soon forget, and when he is remembered, it’s with a pang of empathetic regret.

Some readers dislike any story dealing with time travel or parallel dimensions in any way, mainly for the very obvious theory that when two such realms clash, inevitable tragedy will occur. Michelle is returned to her own reality and the life she wanted at the cost of others’ well-being.

Chapter 46, consisting of only two pages (not quoted here because it would be a spoiler), sums this up extremely well, as does Michelle’s earlier reflection:

“Life is like a book, each page a different possibility, a different reality. One must only know how to turn the page.”

But there could be consequences.

That thesis is never truer than in The Cabin on Souder Hill.