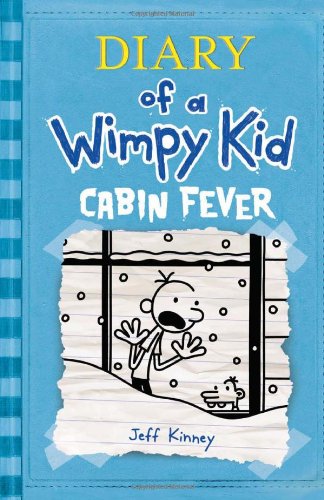 “This highly recommended book in the Diary of a Wimpy Kid series will delight readers ages 8–12.”

Wimpy Kids fans will rejoice at the publication of another book in the Diary of a Wimpy Kid series, one of the most popular series in children’s books today. Cabin Fever does not disappoint.

Written in the familiar format of lined paper with print that looks like handwritten diary entries, Greg records the funny events of his daily life throughout autumn and winter—especially the difficult time between Thanksgiving and Christmas when Greg feels under pressure.

How can a kid be good for a whole month? He knows if he messes up, Santa will hear about it, and Greg will have a miserable Christmas without the gifts he really wants.

In its usually zany fashion, the book touches on a variety of issues such as bullying, accidents on playground equipment, teasing, and even preparing for a new sibling. Greg becomes genuinely attached to a doll that his mother gives him in preparation for handling a new baby and is sad when it disappears.

Then Greg develops an Internet habit for Net Kritterz and needs some spending money to keep his virtual pet in style and tries to earn some by shoveling snow. When that doesn’t work out well, he turns with his friend, Rowley, to planning a bazaar.

Advertising their big event turns out to be a disaster. No sooner do Greg and Rowley get posters up than it rains, causing the letters to run and the green background paper to stain the school building walls. Greg’s punishment is to scrub the walls with bleach.

Just when he thinks his punishment is over and the awful event can be put behind him, he arrives home to find a note on the door, saying the police have come by and finding no one at home will return. Greg, of course, knows they’ve come to haul him off to jail.

He worries what his father will do when the police come in response to his school vandalism. He is left to wonder for days when a blizzard hits, and his father is unable to get home from work. The next few days are misery as the snow grows deeper, the food scarcer, and the temperature lower.

This highly recommended book in the Diary of a Wimpy Kid series will delight readers ages 8–12.

Phyllis J. Perry is the author of over 70 books for children, most recently Panda’s Earthquake Escape (Sylvan Dell), and a frequent reviewer of children’s books.