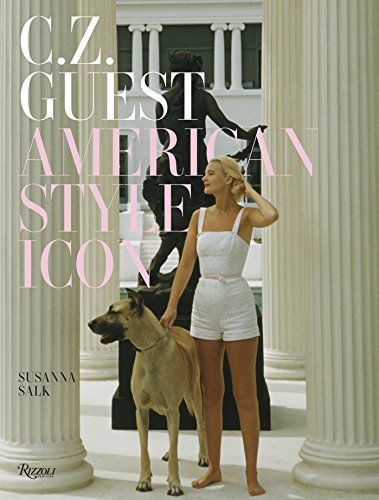 Reader beware! This is just about one of the most beautifully executed books about one of America’s most enduring and quintessential society and style icons: C. Z. Guest.

C. Z. Guest: American Style Icon lives up to its name on every imaginable level and then goes on to deliver a genuinely endearing and personal portrait depicting a woman who is legendary and remains unforgettable. As one is reminded over and over in the book, “We’ll never see the likes of her again.” In the contemporary vernacular: True Dat!

Ms. Salk portrays the “ultimate WASP Goddess” in the most flattering and appealing light. Ms. Guest is remembered in the words of some of her great and notable friends and in her own words and through these words the reader sees evidence of a life well lived by a woman who was not defined so much by her assets—physical, financial, or genetic—but by her joie de vivre and her love of her home, her family, her friends, and her gardens.

She was a lifestyle brand before anyone dreamed up that terminology.

Ms. Guest, who has been an avatar for so called “High Society” for decades, is a great reminder for fashion folk that it is not about what you wear but how you wear it. Style is indeed an innate quality that cannot be bought or passed down generationally. The most apt comparison that is applicable to the likes of C. Z. Guest is that she was a real live Tracy Lord—the part played by Grace Kelly in High Society, but with more humor, less entitlement, less gravitas, and much more pizazz.

Ms. Salk provides the reader with an indelible impression of what it means to be a true lady of “society” as well as what it means to be the captain of your own ship. Ms. Guest bore no resemblance to the poor excuses we have in the 21st century for grandes dames of so-called reality-TV and celebrity propelled society; she was the real deal.

This is a book that one returns to over and over again as the subject and her sphere of influence in the worlds of fashion and style will be remembered for generations to come. C. Z. Guest: American Style Icon should be given as a gift to those who are interested in learning the true definitions of grace and style.

After having been a spectator for so many years, this reviewer feels that Ms. Guest is now among my most cherished friendships. What a privilege it is to know her as she was.