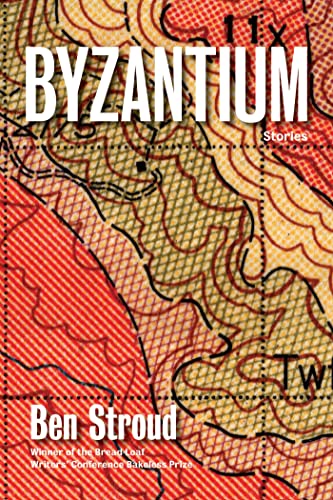 “. . . the majority of the stories in Byzantium are extraordinary.”

In the mid-1800s on an island in the Great Lakes, a young man joins a millennial Utopian community. The man falls in love with a woman, Dorothea, and courts her according to the community’s rules.

He saves the life of the community’s leader, Josiah, during a rumble with a band of sinful Whiskey Traders and receives the sect’s highest honor. Then he learns that he cannot wed Dorothea because she is Josiah’s secret concubine. Appalled, he assists the Whiskey Traders in murdering Josiah.

This story, “The Traitor of Zion,” is among ten diverse and ambitious stories in Ben Stroud’s very promising new short story collection, Byzantium. Professor Stroud spans historical eras and settings—including the Byzantine Empire in the early Middle Ages, Cuba in the early 1800s, Germany in the late 1800s, and present day East Texas. But he sets the plurality of his stories in the mid-1800s and his native East Texas.

Professor Stroud writes with straightforward grace reminiscent of Hemingway or Steinbeck. He is less concerned with scene coloration and more concerned with rich plots (built around a single main character).

The stories in Byzantium move quickly. But that doesn’t prevent Professor Stroud from offering powerful images.

The following passage is a case in point: “Across from me two plump girls with spiked raven hair giggled over their cell phones, indifferent, their thick thighs stretching the weave of their matching leopard-print tights, their stout pimpled faces held close together.”

Two of the book’s most successful stories illustrate the diversity and complexity of this collection: “Amy” is an inwardly focused character sketch of an American expat in Germany as he concurrently wrongs a wife in the U.S. and a new girlfriend. The narrator is contrite and journalistic about his dealings, with a few pangs of well-calibrated guilt.

“The Moor” is a fictional biography of an unlikely (African) American who becomes Victorian Germany’s most famous private detective. It is a neat twist on the genre-blurring quasi-history of Erik Larsen, Peter Carey, etc. Professor Stroud deftly navigates Victorian pop and high culture within a narrative construct nearly unknown to the short story.

Inevitably, short story collections are uneven: “The Eraser,” for example, written in the voice of a brooding teen, is reminiscent of Bret Easton Ellis’s early novels. It’s a well-written story, but its voice and plot are shopworn while other stories in Byzantium are ambitious and surprising.

Byzantium is an uncoordinated collection. The most satisfying recent short story collections—including those of Josie Sigler (The Galaxie and Other Rides) and Allan Heathcock (Volt: Stories)—are built around a theme or narrative device that creates cohesion between the stories. The collection is greater than the sum of its parts; the opposite is the case with Byzantium.

Were Byzantium’s ten stories collected together only because Professor Stroud reached the requisite number of short stories to fill a book?

The high points of Byzantium are very high indeed, and this debut establishes Professor Stroud as an author with a terrific future.