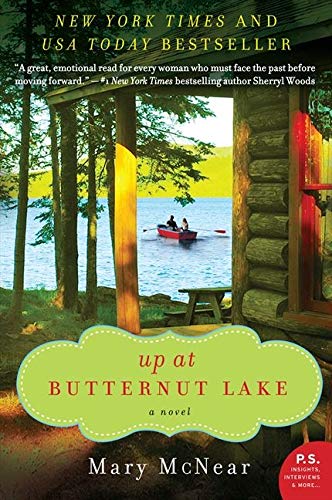 “McNear has created a sweet romance wrapped in several interesting storylines. It’s easy to root for the happiness of all the leads, and it seems likely that all will find peace and contentment.”

“Just a derelict old cabin he’d assumed was abandoned . . . No one would be crazy enough, or brave enough, to actually live there.”

Walker Ford, male lead in Mary McNear’s Up at Butternut Lake, was wrong. Not one but two someones had just moved back to Butternut Lake. Still in mourning following the death of her husband in Afghanistan two years earlier, Allie Beckett and her five-year-old son Wyatt have taken possession of the family cabin with the intention of making it their new home. Though Allie hasn’t visited the small town of Butternut, MI, since she was 16, the memories she made there were strong enough that she believes it can be a home.

Within days, she reconnects with her summertime friend, now a mother of three with one on the way, and an old friend from the diner. This is a romance, so it’s no surprise when she quickly meets Walker Ford, resident rich-ish guy and outsider. Through the course of a summer, all four leads have to face past sorrows in order to move forward in their lives.

McNear has created in Butternut a small town with the quirky characters expected in modern women’s fiction. Aside from the leads, she also introduces a fry cook with a dark past, a snake of an ex, a flighty art gallery owner . . . Though the minor characters don’t play a large part in the main storylines, all are sketched clearly enough that they are both believable and fleshed out. That is a nice trick for any author, and especially well done by someone publishing for the first time.

Familiar romantic novel tropes abound: both leads are stunningly gorgeous, they are fascinated with one another (despite no obvious commonalities, aside from the fact that both are stunningly gorgeous) from the get go, they both start out with shoulder chips, the female lead is a practical virgin (having only “been with” her late husband), and both have tragedy in their pasts. These can be irritating when handled clumsily, but McNear approaches them all with a sincerity that is refreshing.

One modern trope that she chooses to skip is graphic sexual content. That, too, is refreshing. Though there is clearly passion between the Allie and Walker, and it’s rendered well, McNear is content with descriptions of the feelings before and after the act and fading to black on the actual sex. By doing so, she’s elevated her novel. The focus remains on relationships rather than physicality.

In another small triumph, McNear has done very well in her depiction of Wyatt. Children are notoriously easy to either demonize or angelicize; Wyatt is neither. He’s a sturdy little boy who has dealt with some serious loss in his young life. His relationship with his mother is loving and frustrated in turns, much like a real mother and young son. It’s lovely the way McNear has resisted making him a tragic figure or giving either him or his mother serious emotional problems. It keeps them both relatable and enjoyable as characters.

The storylines of the other two main characters are a bit more complex. Jax, the friend from Allie’s teen years, is rendered especially well. She’s likeable, realistic, and her ex problem is believable (if a little far fetched in its conclusion). Caroline (the diner friend) is a bit short shrifted on story. Though her empty nest syndrome is also realistic, the kinda-sorta romance she’s tossed right at the end is rushed.

There is a surfeit of –ly adverbs and people call each other by name too often in Up at Butternut Lake, but who really cares? McNear has created a sweet romance wrapped in several interesting storylines. It’s easy to root for the happiness of all the leads, and it seems likely that all will find peace and contentment. Who can ask for anything more from the genre? Fans of Debbie Macomber and Sherryl Woods should eat this book up in an afternoon and be waiting anxiously for the next story in the trilogy—due August 2014).