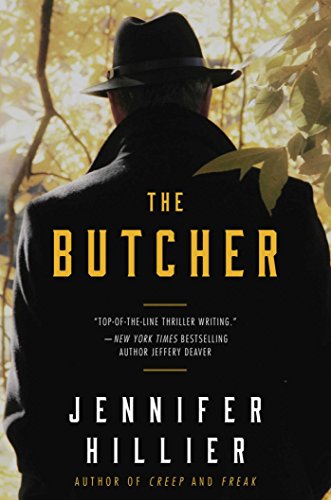 “Replete with plot twists and surprises, The Butcher is an engrossing tale that piques the reader’s interest immediately and then holds on to it like an angry pitbull.”

Jennifer Hillier is the author of two highly praised thrillers, Creep and Freak. Her latest offering, The Butcher, is a fast-paced story that cements Hillier’s reputation as a master of terror and suspense.

The Butcher begins in an unorthodox manner: We learn the identity of the serial killer early on. What the reader must try to discern, however, is whether the police will also discover the name of the monster and how many people he’s murdered.

Along the way, the author has created some interesting characters to flesh out the story. Retired Seattle Police Chief Edward Shank is an iconic figure in the community, having shot and killed the infamous “Beacon Hill Butcher.” The departed serial killer wreaked havoc in Seattle for years, leaving a trail of dead bodies for police to find, all bearing his grisly signature: a severed left hand.

The city breathed a huge sigh of relief when Shank eliminated the killer, but years later it appears someone has taken up where The Butcher left off. Bodies begin to appear with the same signature, but how can that be possible when The Butcher is dead? Or is he?

Meanwhile, Matthew Shank, the police chief’s grandson and highly successful restaurateur, has problems of his own. He takes over his grandfather’s huge Victorian house and discovers a secret that has the potential to change everyone’s life.

Matt’s girlfriend, Sam, is a writer of true crime stories. Much to the chagrin of the retired chief, she is working on a book about The Butcher, her thesis being that The Butcher is still alive. She suspects her own mother was one of the killer’s victims and sets out to prove it. Her investigation steers her down a path that may very well lead to her own murder.

Replete with plot twists and surprises, The Butcher is an engrossing tale that piques the reader’s interest immediately and then holds on to it like an angry pitbull. The last several chapters are a rewarding ending to a well-written tale that thriller lovers everywhere will enjoy.