Butch Cassidy: The True Story of an American Outlaw 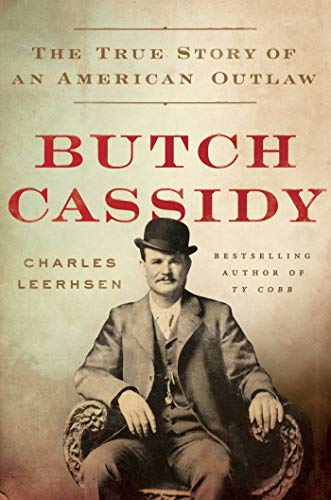 “Butch Cassidy is a fast read, and Leerhsen’s writing style is engaging and believable—a good way to spend a quiet weekend and learn the truth about the Old West.”

If you are searching for a nonfiction, historical study that romanticizes the Old West (U.S.), do not look here. But if you are looking for a Western tale that gets down into the nitty-gritty of late 19th and early 20th centuries, look no further than Butch Cassidy by Charles Leerhsen.

Leehrsen’s focus is on Cassidy, aka Robert Leroy Parker, plus myriad other names he concocted throughout his life.

By all descriptions from people who engaged with Cassidy—either short term or long term—he is described as a good guy, well-liked, and although he robbed banks and trains, he would brook no thefts from the innocent. Often compared to Robin Hood, Cassidy went to extremes to ensure that only the big guys were affected.

Cassidy was a wanderer, never settling in any one place for very long. His greatest foible was gambling, therefore leaving his pockets empty, and a new robbing event not far on the horizon. Although thanks to Hollywood, the general public is most familiar with Butch Cassidy and the Sundance Kid (Harry Longabaugh), Leehrsen brings Sundance into the story only for short visits until the end when Cassidy, Sundance, and Ethel Place left the United States for South America.

The story of Robert Parker (Cassidy) is well laid out and many sources are quoted, bringing Cassidy’s life into clear focus. We learn that his life could have been quiet, peaceful, and productive, but to say that a burr got under his saddle would be an understatement.

Butch had no steady female friends in his life—some came and went quickly, although they would have remained with him had he only asked. Leehrsen brings into question Cassidy’s sexuality. No direct issues of homosexuality, yet his close friendships with some men leaves the question open for discussion, but with no facts. There were rumors of him having gonorrhea.  “Perhaps the rumors about his sexuality, Butch seemed eager for Gibbon to understand that he partook of such earthly [sexual] pleasures [with local prostitutes.]”

As Cassidy’s life of crime began with stealing horses and rustling cattle, it was not long before this life introduced him to several men who rode on the seedier side of life, and soon he found himself leading the “Wild Bunch” through small western towns where banks supported various enterprises such as mining, and in which large payrolls enticed the bandits. In keeping with the reputation he was building with this gang, Leehrsen explains, “They had a reputation as a special breed of robber who bothered the big shots but protected the little man.”

Leerhsen’s approach to the role of the Pinkerton Detective agency paints a picture different from how they have been presented throughout history—perhaps not the forthright and honest organization everyone has come to understand. “It was standard business practice for the Pinkertons to exaggerate the threat posed to companies and associations by people they wanted to be paid to pursue.”

The book delves deep into Cassidy’s history, his family, his beliefs, and his ethics . . . be they what they were. One can’t help but like this man as presented in the pages of Leerhsen’s book. The ending is particularly interesting in that people chose not to believe that Cassidy and Sundance were cut down in Bolivia.  At the location where they are said to be buried, the question still remains today: Who’s really buried there?

Butch Cassidy is a fast read, and Leerhsen’s writing style is engaging and believable—a good way to spend a quiet weekend and learn the truth about the Old West.