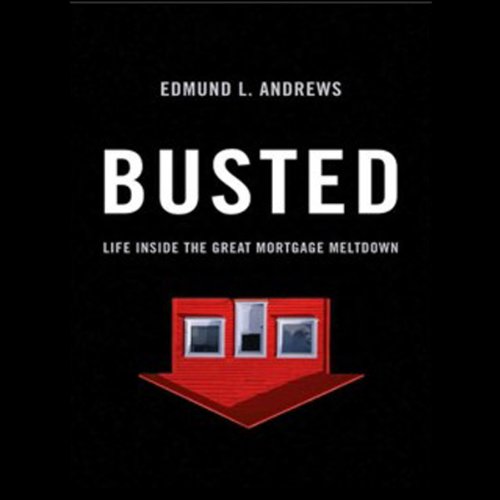 “Busted is even more poignant and shocking by its being narrated by a well-regarded reporter who is informed, smart, detached—and therefore supposedly immune to the temptations that ensnared so many.”

Edmund Andrews’ story is a sobering, cautionary, first-person coulda-woulda-shoulda chronicle of his own experience in the recent and continuing economic meltdown.

What is especially intriguing is that Busted is written by a senior New York Times economics journalist who had unparalleled access to intelligence concerning, reporter skepticism about, and day job immersion in what he was embarking on—yet did it anyway.

Every story of financial reversal is both unique and common. Yet they all share the commonality of aspirations unrealized, risks wrongly assessed, and unanticipated consequences drowning good intentions. Busted is even more poignant and shocking by its being narrated by a well-regarded reporter who is informed, smart, detached—and therefore supposedly immune to the temptations that ensnared so many.

Like so many other people, Mr. Andrews did not fully comprehend the consequences of the financing arrangement to which he committed—which makes no sense considering his job. Mr. Andrews’s inflated mortgage loan funded a lifestyle and level of spending beyond what would be possible or justified based on his actual earnings and assets.

Long story short: as expectations of a better job and more income were not realized, dreams morphed into despair. Personal stress escalated. Relationship strife crowded out love and empathy. Mr. Andrews and his wife ruefully recognized that theirs was not a happy home.

Mr. Andrews got in trouble the same way so many did: buying a house he could not afford and living beyond his means. Though purchased with the best of intentions—to provide a nice home for the combined family that he and his new wife brought to their new marriage—the house was too expensive to begin with. Then he compounded the problem by using credit cards to live beyond his means and rolling the unpaid balance over into a mortgage refinance.

As with so many others whose self-delusion was aided and abetted by the mortgage industry, undiscriminating rating agencies, and growth-committed federal government officials, Mr. Andrews relied on the assumption of continuing housing appreciation to generate ever growing home equity.

Contrary to the lessons of his work as a financial journalist covering economic cycles, he counted on that strong housing appreciation to support multiple rounds of refinancing. The refinancing proceeds would then be used to pay off his credit card debt and to cover the negative mortgage amortization resulting from mortgage debt service payments being less than the actual interest rate charged.

This rolling mortgage refi strategy, of course, depended on the combination of continuing housing appreciation, low interest rates, no economic downturns, housing developers not overbuilding, and no financial services system shocks—which confluence of events had a joint probability even lower than the odds of pigs flying.

In the midst of this pervasive societal delusion, former Citicorp CEO Charles Prince proclaimed [paraphrasing], “As long as the music is playing, you have to keep dancing.” He perhaps failed to consider the admonition by France’s King Louis XIV: “Never trust financial affairs to architects or dancers.”

The debacle ended up far better for Mr. Andrews than for so many others in similar sorry circumstances. He did not lose too much. His future security was relatively unimpaired—and he got to keep his day job at the prestigious, well-paying New York Times

And contrary to the experiences of almost everyone else who suffered in the housing debacle, Mr. Andrews was able to monetize his misfortune by writing a book about his housing misadventures—a book for which book he happened to receive a handsome advance.