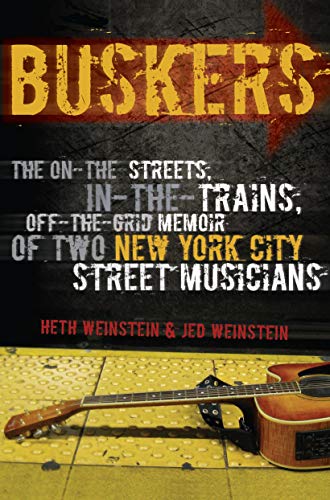 “Buskers is . . . an affirmation of all [the Weinsteins] have endured to get where they are and an inspiration to aspiring musicians everywhere. The message is: With hard work and determination—and of course loads of talent—you can make your own destiny.”

New York is the city of dreams and a cruel mistress. Thousands of people have walked the streets of Gotham dreaming of seeing their names in light. While some have succeeded, many more return home with bowed heads.

With an unceasing flow of millions of people, it’s a wonder anybody even gets noticed, much less becomes a star; but, there is proof: Madonna was dropped off in the middle of Times Square with a few dollars in her pocket and big stars in her eyes. Supermodel Carol Alt was discovered on a train, and famous pop artist Keith Haring got his start making chalk drawings in the subway.

Walking the crowded streets and subways of the city a familiar site can be found on just about every street corner and in every subway station: musicians, dancers, and entertainers putting themselves out there in the hopes of one day making it big. Heth and Jed Weinstein are two such people.

In the form of their first book, Buskers: The On-the-Streets, In-the-Trains, Off-the-Grid Memoir of Two New York City Street Musicians, the brothers Weinstein provide an inside look at being a busker—how they got there and what it takes to stay.

In memoir style, Heth and Jed recount their rocky childhood in the suburbs of New Jersey. Children of divorce and a mostly absent father, the brothers found ways to pass the time and make a buck—usually in the form of petty crime and low end drug dealing.

Luckily, their love for music far outweighed any thoughts of becoming career criminals and the Weinstein brothers began pursuing their dream. Forming their first band Airport Hug, it looked as if their music career was off to a good start; however, it wasn’t long before the group was plagued by infighting and other common band issues, just as they began work on their first CD.

Currently on the outs with Jed and frustrated about the ever elusive record deal, Heth brainstormed for new ways to get their music to the masses and ended up taking his amp and guitar into the subways. Once he realized that his efforts might actually be lucrative, Heth approached his brother about joining him and the rest, as they say, is history.

Buskers is a great forum to not only showcase the efforts of these enterprising musicians, but also serves as an open letter to future performers looking to follow in their footsteps. However, taking an act to the streets is only half the battle, as the Weinsteins learned the hard way, being tough enough to stay there is where the fight begins.

For years Heth and Jed braved bitter winters, suffered through unbearable heat, and even took on one of the most dangerous gangs on the east coast in pursuit of their dream. As a result of their unwavering drive and determination, the duo have sold thousands of CDs and amassed a legion of devoted fans.

Despite this being a book review, Jed and Heth Weinstein aren’t looking for kudos on their prose, tone, or plotline. Buskers is more an affirmation of all they have endured to get where they are and an inspiration to aspiring musicians everywhere. The message is: With hard work and determination—and of course loads of talent—you can make your own destiny.