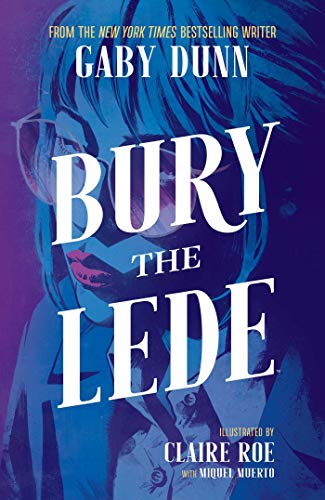 In journalism, “bury the lede” is a term of craft: placing the most important point of the story too far down in the text, too distant from the all-important lead paragraph. Doing so is one of the cardinal sins of the reporting world. In Gaby Dunn’s noirish graphic novel of the same name, the phrase has a dual, murderous meaning.

In the book, intern Madison (“Madi”) Parker is working at The Boston Lede, “the biggest newspaper in the Northeast” (don’t tell the New York Times). Her paper is clearly a stripped-down, stand-in for the Boston Globe, where the author once worked. Here, understandably, the publication is portrayed more along the lines of the cartoonish Daily Planet in Superman’s Metropolis, or Spiderman’s Daily Bugle.

Madi is under considerable pressure at the paper: “I have three months left to make an impression,” she explains, before her internship ends and her career fate is decided. So, like other underpaid journalists, she is fueled mainly by the fumes of ambition. And she is competing on the story—not always successfully—with the local tabloid. Luckily for Madi, the neophyte reporter stumbles into a bloody Boston murder in the tony Beacon Hill neighborhood. It’s a big break—dead, rich, white people make the best copy.

In the narrative spine, Madi cultivates a relationship with the imprisoned, main suspect, Dahlia Kennedy, a sly, sultry, blond, Veronica Lake lookalike, a socialite with a mysterious past. Complicating matters further for Madi is a steamy, lesbian romance with a newsroom colleague.

The novel captures the creepy, competitive dynamic impressed on crime reporters, especially young ones on the make, that the worse the crime, the more prominent the coverage. So, as artist Claire Roe ably illustrates, there is the unavoidable element of sociopathology inherent in the reporting process.

So naturally, Madi lies, wheedles and feigns empathy—all tools of the dark side of the trade—to get the big story that could be her ticket to a staff job. But in the process, she commits another of journalism’s cardinal sins: She becomes part of her story, and a central part at that.

Thus, Bury the Lede revives the familiar fictional trope of the journalist who solves murders. This happens regularly in movies, in mysteries, and on television, although rarely in real life. Notwithstanding, it’s a satisfying fantasy, here and elsewhere in popular culture.

There are some problems with the narrative. It’s never made clear why Madi suspects from the outset that Dahlia is not guilty of the murder. And why is Dahlia, from her jail cell, always one step ahead of Madi, always manipulating her?

Still, it’s an entertaining fantasy of what legacy print journalism is—or was.