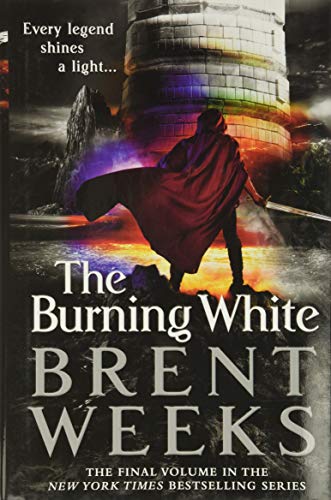 What started with The Black Prism in 2010 now concludes with the fifth and final book of the Lightbringer series, The Burning White.

Set in world of gods, wizards, and monsters, The Burning White revisits the well written and three dimensional characters of Gavin Guile, the greatest wizard in the world who is maimed in body and soul; his son Kip Guile believed to be the legendary messiah The Lightbringer; and Karris Guile, Gavin’s wife; and a religious leader called The White.

Gavin searches for God (called Orholam), sent on a mission by the secretive order of assassins called The Order of the Broken Eye to kill the deity with an ancient artifact called the Blinding Knife. He does so because the Order will kill his wife if he doesn’t. Meanwhile Karris deals with her son Zymun, a sociopath who will do anything to reach the pinnacle of power by becoming The Prism (a mixture of High Wizard and Pope). During this time, she must contend with Gavin’s father, Andross Guile, the current Promachos (a military/political leader) whose web of deceits and plans stretch for more than 40 years.

Meanwhile, Kip Guile fights a war against the insane wizard called The White King, who is, in fact, Karris’ older brother Koios, who was maimed by Gavin Guile many years ago. Kip and his loyal followers, The Mighty, must outwit the White King and save the Seven Satrapies of the Empire. It doesn’t help that arrayed against him are the evil wizards called the Blood Robes and hosts of those who would betray him. Along with his wife, Tisis, he must find an old magic to defend against a new enemy.

With a cast of well-defined characters too numerous to recount, Weeks caps off his epic series with a finale that pulls out all the stops and then some. Just when the ready thinks Weeks has the book dialed all way to 10, he then pushes to 11, delivering a wild ride that throws everything at the reader including the kitchen sink. This includes epic magical battles, a war at the heart of the Empire, and a pilgrimage to discover the source of all magic.

If the book had been written by someone without Weeks’ deft hand at prose, it might have been an interminable slog, but the author knows how to keep the reader’s attention glued to the page. What might have been boring and pedantic becomes an exciting tapestry of love, loss, bittersweet melancholy, and adrenalin pumping action.

There are moments that seem to drag on and some of the book could have been edited to for a smoother read, but the writing is so good that this is an easily forgivable error. Weeks leaves very few stones unturned in this, the exciting conclusion of his series, leaving the reader almost breathless with satisfaction. One of the greatest works of fantasy in the last 20 years, The Burning White hits all the buttons then invents more buttons just so it can hit those, too.