The Burning Girls: A Novel 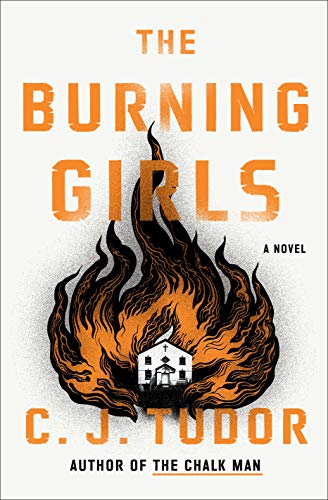 “This story has more twists and turns than a corkscrew, and just when the reader thinks he’s figured it out, there’s one more turn of that screw.”

After detrimental publicity over the death of an abused child she tried to help, Reverend Jacqueline “Jack” Brooks is transferred, under protest, to the village of Chapel Croft. With the death of the current vicar, the position there comes open at a very opportune time.

“‘We have to give careful consideration to what we do next,” the bishop said.

‘A transfer. Somewhere less high profile. A small church in Sussex has fond itself without a priest. While they nominate a replacement, they need an interim vicar.’”

Jack has a lot on her plate. Besides fighting the prejudice against female priests, she bears the onus of the child’s death, plus the guilt of her own husband’s, also a reverend, who was killed during a botched burglary. Jack has just been notified the killer’s sentence has been served, and he’s being released from prison.

With reluctant teen daughter Flo, she settles in and acquaints herself with her new parish and discovers even more anguish.

Chapel Croft has a dark history. Five hundred years before, it was the scene of a mass murder in the form of the burning of five Protestants.

‘What are those?’ Flo asks.

I reply, ‘Burning Girls. They’re something of a tradition. People make them to commemorate the Sussex Martyrs.’

‘Villagers who were burned to death during Queen Mary’s purge of the Protestants. Two young girls were killed outside this chapel.’

‘And people make creepy twig dolls to remember them?’

‘And on the anniversary of the purge, they burn them.’”

More recently, the vicar Jack is replacing hanged himself in the chapel.

All this gives Jack a great deal to think about, between worrying about Flo’s adjustment to village life, and the odd behavior of some of her new parishioners.

She discovers her predecessor was interested in the history of the Martyrs and had made some kind of discovery just before he died.

Then, there’s the welcoming gift someone leaves for her, an exorcism box, with an unsigned note containing a biblical quotation.

“The interior is lined with red silk, the contents held in place by straps: a leather-bound Bible, a heavy cross featuring a prostrate Jesus, holy water, muslin cloths, a scalpel and a large serrated knife.

Flo leans forward. ‘Mum, is that—'

Soon, Jack will have more to worry about.

Unknown to her, her husband’s murderer is making his way to Chapel Croft.

Flo meets Wrigley, a village teenager, a disabled boy deemed “weird” by his peers. His mother is a writer of popular paranormal novels. Flo likes him. Jack disapproves.

Flo and Wrigley become the object of bullying by the daughter of one of the town’s leading citizens, a descendant of the original Martyrs. The girl’s father is definitely hostile.

A friend of the dead reverend hints his death was murder.

And then, one night Flo hears something in the chapel. When she investigates, the floor collapses beneath her, revealing three coffins, tucked away in a hidden vault under the pulpit—three coffins containing more than three bodies.

All Jack’s fears and all her secrets are about to come tumbling out for everyone to see, and she’s also about to learn that a quote she hears from a movie is eerily true: “The greatest trick the devil ever pulled is pretending he doesn’t exist.”

If all small towns and villages had as many secrets as writers claim, it’s a wonder they haven’t murdered themselves out of existence; The Burning Girls is no exception. This story has more twists and turns than a corkscrew, and just when the reader thinks he’s figured it out, there’s one more turn of that screw.

At first, the characters seem the usual personages found in this type of story, harmless if clichéd, but gradually each takes on more sinister overtones as Jack learns about the martyrs and delves into the history of the girls who disappeared.

As with C. J. Tudor’s other novels, there’s a great deal going on behind the façade of the quiet little village, with each character, from Jack herself to the persecuted and neurologically challenged Wrigley, having a plethora of dark and deadly secrets.

It’s entertaining reading with chills of the “sneaking-up-on-you” kind, with  plenty of descriptions of dark and brooding graveyards with blasted headstones to set the proper scene. Anyone who has read The Chalk Man, or The Other People, will enjoy The Burning Girls. Those who haven’t read any of them definitely should.