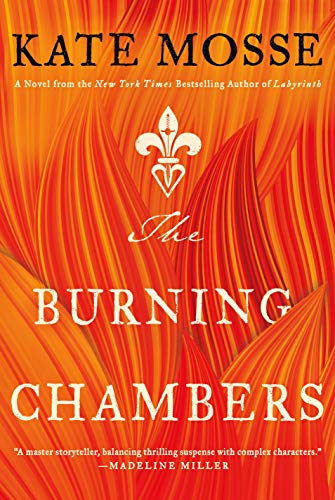 “The Burning Chambers is a masterful novel . . .”

Religious intolerance is an all too common occurrence in human history, erupting periodically in bloody massacres that leave a permanent stain upon the society and religious people who believe there is only one way to worship, and it is their way.

Kate Mosse creates a fictional portrait of the Wars of Religion in France between the Catholic Church and the protestant Huguenots from the massacre of Huguenots in Vassy on March 1, 1562, to the signing of the Edict of Nantes on April 13, 1598. In between those dates millions on both sides were slaughtered without regard to age or sex.

In Mosse’s debut novel in a projected series about the religious conflict, The Burning Chambers explores the beginnings of France’s religious wars that were rooted in the Reformation, Henry VIII’s dissolution of British monasteries, John Calvin’s safe havens for Huguenots in Geneva and those provided in Amsterdam and Rotterdam.

While the Huguenots belief in worshiping in one’s native language, rejection of relics and the intercession of priests between the individual and God, as well as a repugnance toward much of Catholic doctrine, were anathema to the church, human greed for power and the determination of established religion to preserve its place in the hierarchy of society also played its part.

Unlike most historical fiction peopled by kings and queens, dukes and earls, and every other aristocrat with any claim to power, The Burning Chambers features ordinary people, mainly middle class skilled artisans and shop owners, along with their servants who are more often treated as family members rather than nameless minions who perform necessary, but often unpleasant chores for their masters.

Minou Joubert, a young Catholic woman, is managing her father Bernard’s book shop, while Bernard is in poor health. But Minou knows there is more to her father’s condition than mere disability.

“From one who smiled and had a kind word for everyone, a good neighbor and loyal friend, he was now a shadow in his own life. Grey and withdrawn, his spirit diminished, a person who no longer spoke of ideas or dreams.”

Bernard has been in such a condition since returning home to La Cite from a business trip, but he refuses to discuss what is wrong. Minou is now responsible for the book shop, as well as looking after her 13-year-old brother, Aimeric, and her little sister, seven-year-old Alis.

Piet Reydon, illegitimate offspring of a Dutch mother and French father, is a staunch French Huguenot, who is also an agent for the Huguenot cause. He carries a valuable relic, the famous Shroud of Antioch, “A small fragment of the cloth, within which the body of Christ had been laid to rest . . .”

Piet is in Carcassonne to sell the Shroud, a relic stolen by another, to Crompton and his cohorts in exchange for much needed gold to buy arms and supplies for Huguenot forces. Although Huguenots consider belief in relics to be superstition, Piet still feels that the Shroud is more than mere cloth, and he regrets having to sell it, but gold is necessary if one wishes to defend the faith.

Another cause also calls to Piet. He wishes to see his old schoolmate, Vidal, now a Catholic priest. He wishes to repair their broken friendship. Piet returns to his boarding house to find soldiers searching it. Is it Vidal who betrayed him, or is there a spy among the Huguenots?

Minou hides Madam Noubel, the owner of the boarding house, from the soldiers. “The world has gone mad,” Madame Noubel sighed, shrugging her heavy shoulders.”

Minou and Piet meet by accident in La Cite, each feeling an instant attraction for the other. But Piet disappears, and Minou doesn’t see him again until she and Aimeric move to Toulouse to live with their aunt, Madame Boussay, a flighty woman who lives in fear of displeasing her tyrant of a husband and his equally unpleasant sister-in-law, Madame Montfort.

An altercation between Catholics and Huguenots is a backdrop to a meeting between Minou and Piet in Toulouse. A greater battle between the opposing religious forces looms over their relationship.

Something else worries Minou besides the tension between Catholics and Huguenots: a letter delivered to the book shop before she left. “SHE KNOWS WHERE YOU LIVE.”

The note is not signed, nor does Minou know to what it refers. Another thing worries her. She has written several letters to her father, but has received no answers from him. Not until the battle for Toulouse between the Catholics and the Huguenots begins, and Madame Montfort abandons the house, does Minou find the letters from her father that Montfort has intercepted, as well as others from a stranger who announces she is holding little Alis for random.

All the characters meet up in a tiny village where Minou and Piet plan a rescue of the little girl.

Journal entries from a psychopath who has already murdered several persons provide commentary as to why Minou is a danger to the writer. Minou must be murdered.

Mosse weaves a rich-textured tapestry of history, characterization, and setting  that brings to life a time of intolerance that seems an echo of our own.

However, the prologue set in the 19th century in South Africa, seems a discordant scene as there is no context. It might have worked better as an Epilogue.

Otherwise, The Burning Chambers is a masterful novel that will keep one reading far into the night. The next entry to this series can’t come too soon.