Burn-In: A Novel of the Real Robotic Revolution 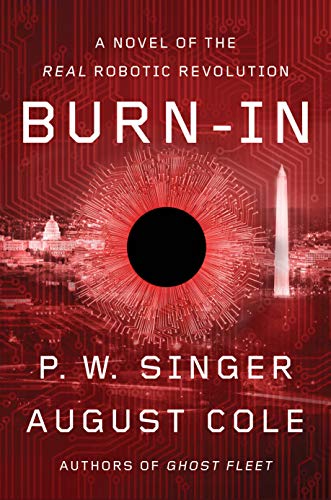 “an eccentric amalgam of Neuromancer and The Hunger Games . . .”

Who will be the new winners and losers in a world dominated by robotics, artificial intelligence, and surveillance technology? These are some of the questions the authors tackle in their second major novel, following in the footsteps of their critically received Ghost Fleet.

The novel reads like an eccentric amalgam of Neuromancer and the Hunger Games, blending a great deal of detail on emerging technologies that is at times downright scary, with a tale of humanity struggling to come to terms with an unknown future. Not content with merely writing a techno-thriller, the authors imagine a somewhat dystopian future in which robots and AI systems have not simply replaced humans in labor intensive or repetitive tasks, but broad categories of jobs and activities. Perhaps more menacing than a Skynet controlled army of killer Terminators, this replacement of man with machines has left people unemployed, hopeless, and ready to strike back like modern day Luddites.

This is where the tale begins, with an FBI agent receiving a prototype robot to field test under actual crime solving conditions. The story quickly picks up as their investigation of seemingly unconnected failures of computer systems affecting everyday life in the DC metro area is quickly connected into a conspiracy that forces the agent and her robotic assistance into a chase to ward off catastrophe.

As the pair race against time to stop increasingly destructive acts of sabotage, the agent is forced to come to terms with not only her own past, but her current marriage, in which her husband has lost his job to artificial intelligence and longs for the days when human intelligence was more valued. She must also determine how far she can trust her new artificial partner, noticing both its strengths and limitations in the fine arts of thinking about and reasoning with the world around them.

The use of unmanned systems has been a feature of the U.S. military for over 20 years, but they were almost always under remote control by a human or had a very simple intelligence to perform particularly hazardous battlefield tasks. But with the rapid advancement of both mechanical and software systems, all footnoted by the authors, one of the features of both their novels, there really is no potential limit to what self-learning software and more advanced mechanical robots could achieve.

The authors have some unusually long discussions of technology scattered throughout the story, which can bog it down at times, but their vision of what these technologies could bring to American society at large, including the potential pushback from elements of society that fear being threatened and basically made obsolete make the story even more absorbing.

From the time of the Industrial Revolution, social structures have had a difficult time adjusting to severe changes in how work is performed and valued, and the robotics revolution could be, as the authors discuss, the most jarring of all. If you want to get a feel for how robotics might really change America and determine for yourself if this is a future you dread or anticipate, this novel offers some intriguing insights wrapped up in a page-turning mystery.