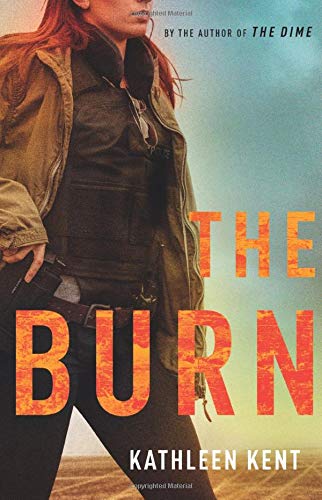 Narcotics detective Betty Rhyzyk returns in this sequel to Edgar Award finalist The Dime, to face the consequences, both physical and emotional, of her confrontation with a violent cult, while at the same time battling a drug cartel whose hitman, El Cuchillo, the knife, carries torture to a whole new level.

Betty Rhyzyk is about as opposite from warm and fuzzy as any female character one might expect in noir fiction. She is tough and her edges are more than rough, they are jagged enough to cut glass. She is loyal even when the subject of her loyalty might not deserve it, and her relentless courage sometimes borders on the foolish. In short, she goes where angels fear to tread.

A native New Yorker, Betty witnessed an explosion set by her older brother and his partner that killed a high level drug dealer, two of his men, and his baby daughter.

When Betty attempts to confront her brother, her father stops her. “You don’t get to ask what happened . . . You’re not a cop. Yet . . . Until you’ve walked the walk . . . you can’t possibly know what it means to keep a fellow officer’s confidence.”

Betty refuses to speak to her brother, refuses to hear his explanation. Two weeks after the explosion he commits suicide, leaving her a letter confessing that he and his partner were on the take from the drug dealer.

Learning her brother and his partner were “bent” cops is something she never talks about, but she sometimes regrets not giving her brother a chance to talk. Maybe she could have helped him redeem himself. It is a hint that Betty feels remorse over her reaction to her brother’s corruption, but only a hint.

In the end Betty is an honest cop with very little give in her view of right and wrong. She sees actions in black and white with very little gray. She doesn’t forgive someone who breaks the law; however, she sees departmental rules as not quite the same thing as the law.

Now living in Dallas and working as a narcotics detective for Dallas Police Department, she chafes at the rules that chain her to desk duty until she is physically able to return to field work.

During her sick leave she has a tattoo done on her leg: “the archangel Michael, the patron saint of cops, wielding a sword, about to skewer a dragon beneath one sandaled foot.”

The tattoo hurts, but Betty endures it. “It’s my penance for being an asshole . . . For being blunt, impatient, and unkind to the people I care about . . . For keeping secrets.”

Betty knows she is on shaky ground psychologically speaking. She is brusque with her wife, Jackie, to the point that she wonders how long it will be until Jackie asks her to move out. Her reflection in the mirror the day she returns to work is that of a woman with “the overly thin, haunted expression of a rescued wilderness survivor left too long in the brush.”

Marshall Maclin, Betty’s sergeant and an ambitious jerk who tries to intimidate her at every opportunity—unsuccessfully—refuses her a field assignment despite her passing her medical. “I disturb his sense of The Ways Things Should Be.”

Her life doesn’t return to normal just because she returns to work. Dottie, owner of Slugger Anne’s Bar and a recovering addict, hints that Betty’s partner, Seth, is keeping bad company. Betty is already worried as she has seen Seth taking pills for his gunshot wound. The problem with his excuse is that his wound is already healed, and he shouldn’t need the pills.

Betty’s first assignment, one a rookie could do, is to troll the headshops to see who is still selling synthetic marijuana. Her altercation with two owners of a headshop gives Sergeant Maclin an excuse to send her back to the departmental shrink.

Meanwhile, bodies of drug dealers are turning up all over Dallas. Little evidence is found except handwritten Bible verses left on the corpses, just like the verses The Family used to send to Betty. When someone tries to break into Betty’s house, she is certain that The Family, the cult that kidnapped her, is stalking her. With El Cuchillo lurking in the shadows Betty doesn’t need other complications.

Things suddenly appear to be even worse. An informant tells Seth and Betty that he knows a witness who says the shooter is a cop. Worried about Seth, Betty goes looking for the witness and ends up in a drop house where she is knocked unconscious.

Betty is suspended by Maclin, so she goes rogue, searching for the shooter whom she hopes is not Seth. She hopes the shooter is not a cop at all. With help of street people such as Dusty Rose, a former transgender marine; Mary Grace, a homeless girl seven months pregnant and her boyfriend Wayne; a huge homeless librarian named Mountain; and Betty’s old friend, Dottie, she of the Old Slugger’s Bar, Betty relentlessly searches for the shooter, and the search leads back to the police department.

Kathleen Kent’s Dallas setting is so meticulously drawn that one can practically smell the streets, the sour odor of the street people. All of her characters are memorable, and not a single one, even the minor characters, is less than three dimensional. ] Kent has a talent for creating real people with a few succinct sentences.

Her plot is complex, and much of the action is violent as one expects from noir novels. Those who may be uncomfortable with Betty’s and Jackie’s lesbian relationship, suspend your discomfort; otherwise, you miss the best kick-ass character to come along in several years.