The Burglary: The Discovery of J. Edgar Hoover's Secret FBI 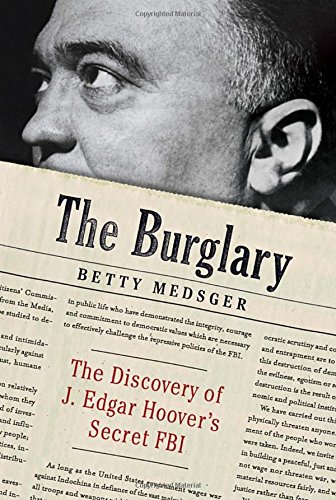 “The Burglary shows how a small group of committed individuals performed the bravest act of all, exposing Hoover . . .”

On March 8, 1971, two momentous events occurred that shook the foundations of the American psyche. The first, The Fight of the Century, Joe Frazier beat Muhammad Ali in the most sensational upset in modern boxing history. The second, J. Edgar Hoover's FBI was robbed blind by a ragtag collection of left-leaning activists. Both Ali and Hoover seemed like invincible adversaries, Ali racking up victories and KO's with stunning efficiency.

J. Edgar Hoover, with dirt on just about anyone sitting in public office, ran the FBI like a dictatorial fiefdom, the budget ballooning to match his deft fear-mongering and narrow-gauge anticommunist rhetoric. In his half-century as FBI Director, J. Edgar Hoover had become the most powerful non-elected civic official in the United States. Unquestioned, untarnished, and unbeatable. His FBI had gone from its early successes in the Palmer Raids and fighting Prohibition-era organized crime to a bloated decadent bureaucracy expert in crushing dissent, targeting leftists, partnering with the American Legion and racist organizations, and creating a file on just about anybody that irked Hoover's idiosyncratic prejudices.

The Burglary, by Betty Medsger, poses this question: “When is it justified to break the law?” For a physics professor and the ordinary citizens he recruited for this caper, it was a question worth serious consideration. Not only were they breaking the law, they were breaking the law to break in and steal materials from the FBI, the nation's top law enforcement organization.

Following the break-in, the burglars retreated a Quaker cottage used by pacifist groups. During the weeks that followed, the burglars sorted through the voluminous paperwork they stole from the small FBI branch office in Media, Pennsylvania. One of the memos Hoover wrote involved having agents foment paranoia. Such ideas had been the purview of writers like Thomas Pynchon and Philip K. Dick. As the saying goes, “Just because you're paranoid, doesn't mean they aren't after you.” Hoover's FBI puts that into practice. To fight back, this small group of activists finally begin sending copies of documents to notable politicians and journalists. One such journalist was Betty Medsger.

Because of this act of civil disobedience, the FBI would have its first public investigation in nearly half a century. The break-in and ensuing scandal can be seen in two lights. The first is amidst the political tumult of the Seventies. Just one year after the Media break-in, the Watergate hotel was subject to a break-in. The FBI and Watergate burglaries began a major re-appraisal of American power culminating in the Watergate hearings and the Church Committee. The greatest irony is that the political pendulum eventually swung back, from the activist Seventies calling for oversight of the organization back to the law-and-order sloganeering of Ronald Reagan.

Another viewpoint to consider the Media break-in is with the rash of contemporary whistle blowers, including Bradley Manning and Edward Snowden. With the recent court decision calling domestic NSA surveillance legal, Americans once again have to reconsider how they got themselves into this fine mess. Ms. Medsger traces the political swings as well as the lives of the burglars in the years and decades following the burglary. (The only awkward wrinkle in the outrage over contemporary suveillance measures is that with social media websites participants routinely surveil each other.

This book brings up a valid issue. When faced with a national security crisis, is it the citizen's responsibility to hold their law enforcement personnel accountable for their actions? Today's NSA, like Hoover's FBI, operates with a blanket inefficiency, vacuuming up data regardless of its worth. When national security is on the line, this blanket surveillance is unconstitutional and, on a more practical level, it just doesn't work.

The Burglary shows how a small group of committed individuals performed the bravest act of all, exposing Hoover's tyrannical misrule to the light of day and the acid test of popular opinion.