The Bureau of Misplaced Dads 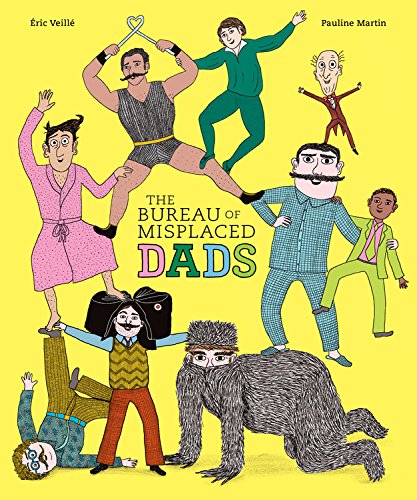 The Bureau of Misplaced Dads is both an homage to and a clever variation on Where the Wild Things Are; an author could do a lot worse than emulate one of the most successful children’s books of all time.

Sendak’s 1963 classic is beloved for good reason. It is the prototypical children’s story, told with maximum efficiency. It’s a fun (and brilliantly illustrated) fantasy: an overly rambunctious boy sent to his room finds it slowly transform into a jungly world where he masters an island full of monsters before heading home. But hidden there is a template for making such apparently simple stories resonate with psychological depth. A child has a crisis (a universal sort, like having trouble controlling oneself). To deal with his distress, he journeys into his imagination. After mastering his emotions, he is able to return to the real world better able to navigate it.

The Bureau of Misplaced Dads, written by Eric Veile and illustrated by Pauline Martin, follows this template precisely, but does so in its own unique and memorable way. Where Wild Things is fantastic, Bureau is surreal, and where Sendak wants to excite, Veile and Martin aim to amuse.

Both the child’s crisis and the book’s humorous tone are announced on page one, when the bespectacled young narrator tells us, “I accidentally misplaced my dad this morning.” He wanders out looking for him and winds up at the Bureau of Misplaced Dads, where he is shown all sorts of lost fathers waiting to be picked up, from the cave men who’ve been there forever, to the criers comforted by juice and cookies, to the striped sweater wearers, and mint-flavored bubble gum chewers. He also gets a gander at some who’ve been released back into the “wild,” before being offered the chance to adopt a new father from an absurd lineup that includes a dad from Strasbourg, a dad with crumbs in his mustache, and dad who smells like mountains.

When the boy breaks down crying at this proposition, the dads cheer him up, climbing on each other and even carrying him aloft in a straight-out-of-Sendak piggy-back parade.

Comforted, the boy suddenly remembers where his father is: pretending to be a coat rack. He hurries home, climbing back into his breakfast room through a trapdoor—and there is his father, waiting for him. In another nod to Wild Things, we see that dad’s breakfast is still warm.

So here we have a winning variation on a brilliant formula. At first blush, The Bureau of Misplaced Dads is a delightfully kooky story that will amuse any young reader. (Pauline Martin’s old-fashioned illustrations, reminiscent of Esphyr Slobodkina’s 1938, Caps for Sale, may appeal more to adults than children, but her odd dads are appropriately off-kilter for the story.) But like Wild Things, the book also captures in a creative and compelling way the essence of how a child might find a way to deal with difficult feelings—in this case, the fear of losing a parent.

It’s highly unlikely that The Bureau of Misplaced Dads will experience anything remotely like the success of Where the Wild Things Are, but it deserves attention because, like its inspiration, it shows how much more than children’s stories some stories for children can be.