Bunuel in the Labyrinth of the Turtles 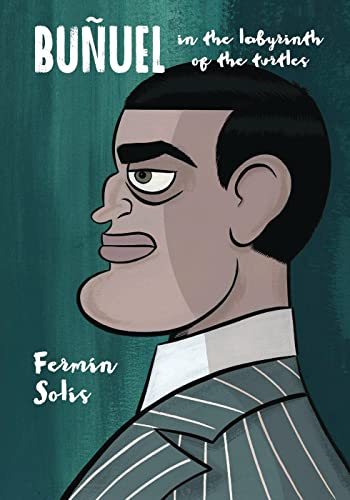 “Isn’t the final goal of surrealism, after all, to transform the world?”
—Luis Buñuel

Luis Buñuel, though not well-known to mass audiences in the US, was one of the 20th century’s great European film stylists, in company with Federico Fellini, Michelangelo Antonioni, Ingmar Bergman, Francois Truffaut, and Jean-Luc Godard. Over a long career, he made controversial films on sensitive political and cultural issues, and succeeded in provoking extreme reactions from the forces of the status quo that manned the ramparts of bourgeois society.

His career spread widely over Spain, France, Mexico, and the United States, and placed him in a diverse mix of roles and employments—as documentarian, as avant-garde experimenter, as dubbing supervisor, as bit part actor, and most notably as a feature film director working with A-list actors like Catherine Deneuve and Fernando Rey.

Buñuel in the Labyrinth of the Turtles, a baffling title intended to arouse curiosity, deals with the production of one of Buñuel’s early films, Las Hurdes: Land Without Bread (1933), a documentary overlaid with the usual surrealist disturbances: irrationality, jarring contrasts, an underlying mockery of conventional modes of thinking and perceiving.

The book is presented as a graphic narrative, with images and text by the Spanish cartoonist and illustrator Fermín Sólis, translated for English readers by Lawrence Schimel. It was published by Self Made Hero, a quirky British imprint that specializes in graphic narratives about iconic intellectual and artistic figures—Sigmund Freud, George Orwell—and works by the British artist Ian Culbard.

The first thing to say about this book is that it is beautiful—beautiful to look at, pleasant to hold, lovingly made from front to back and all the pages in between. The substance of the book is Buñuel’s location filming of Las Hurdes, a movie that followed the groundbreaking Un Chien Andalou (1928) and L’Age d’Or (1930), both made in France where the surrealist movement founded by André Breton was flourishing and making strange bedfellows of Buñuel, Salvador Dalí, and the American writer Henry Miller.

The narrative begins in Paris, in a café, where Buñuel and his close friend Ramón Acín commiserate over Buñuel’s tenuous standing in the surrealist movement following his break with Dalí. The scene then shifts to Las Hurdes, a harsh but beautiful mountain landscape in northern Spain whose peasant inhabitants live at the edge of survival in squalid villages, the roofs of whose huts resemble the shells of turtles. Buñuel and his small film crew absorb the miserable existence of the Hurdanos, which Buñuel then renders through the cruel ironies that surrealist techniques favor. His film avoids the maudlin sentimentality of the patronizing outsider. Chided by his producer Acín for straying from documentary “truth” by deliberately manipulating situations for the camera, Buñuel retorts, “We have to recreate this in order to denounce it.”

The graphic narrative form is well-suited to a book about a filmmaker. The illustrated panels resemble the scenes of a movie storyboard, with their changing angles and lighting effects. Solís uses dark, muddy tones throughout—browns, olive greens, midnight blues—until the final surrealistic sequence in which Buñuel encounters a giant tortoise who tells him philosophically that his film cannot help the Hurdanos, who cling resolutely to their miserable existence, nor can it alleviate the misery embedded in all societies. Buñuel is left to ponder this bleak assessment of his career prospects as a revolutionary artist dedicated to change.

In real life Buñuel soldiered on, finally settling in Mexico and continuing to make provocative films that challenged the authority of both church and state. Not surprisingly, Buñuel’s forays in Hollywood were unproductive and fruitless. But the international film community recognized his substantial gifts to the word of cinema and showered him with accolades for films such as Viridiana, Belle de Jour, and The Discreet Charm of the Bourgeoisie.