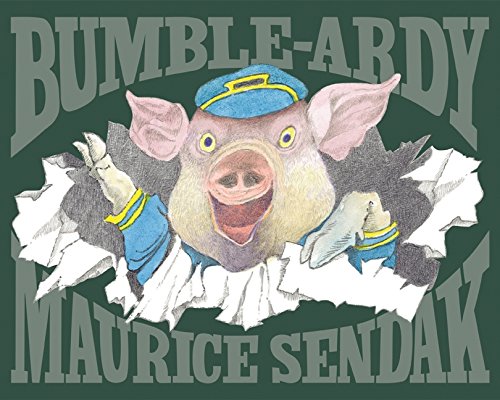 Let the wild rumpus recommence! After 30 years, renowned author/illustrator Maurice Sendak is back with a sly new picture book oozing with revelry and rhyme.

Mr. Sendak, whose classic Where the Wild Things Are won the 1964 Caldecott Medal, has returned to that dark and fertile territory where youthful rebellion leaves room for love, forgiveness, and reconciliation. Peering from the cover, the yellow-eyed pig Bumble-Ardy, donning a blue sailor cap perched between big petal-pink ears, looks as if he’s ready to party. Is he ever!

In his nine years, he’s never celebrated his birthday. His parents, we learn in the prologue, ignored birthdays and then were eaten when he was eight. “So Adeline, that aunt divine,/ Adopted Bumble when he was nine./ Now, ain’t that fine?”
Sweet Aunt Adeline, dressed in a Victorian pink and lavender dress coat, presents the birthday pig with a “hotsy-totsy cowboy costume” and a hefty, candle-laden cake—but no party. Bumble-Ardy throws on the suit, lassos his stuffed pig, and preens in front of the mirror. The reflection of the pig’s mischievous expression ushers in a shift in the story’s tone.

Bumble-Ardy proceeds to invite “some grubby swine” to join him “for cake and brine at ten past nine.” Which sounds fine, except for the fact that his aunt must leave the house just minutes earlier to go to work. And Aunt Adeline does not approve of pigs guzzling her fine, homemade brine. That’s not enough to stop this nine-year-old from breaking the rules. After all, we are in Maurice Sendak territory and have encountered “some swill pig,” as a yellow banner proclaims. Here’s the author’s opportunity to unleash his own wild imagination and wicked sense of humor.

As he did in this story’s first incarnation, a 1971 animated short produced for “Sesame Street” by Jim Henson, Mr. Sendak spins a simple plot that pits an impish boy against the constraints of his old-fashioned matriarch Adeline. The author/illustrator changed the wine to brine and the impish boy (reminiscent of the author’s famous Max) to a pig.

Happily, the picture book format allows for greater exploration of the sights and sounds of Bumble’s escapade. Surprises both bright and dark abound for the reader. Various signs carried by swine both further the plot and enrich it with humor and words that rhyme with nine. Banners and balloons in pink, blue and yellow display that word in various languages—Italian, Hebrew, and Dutch—and foreshadow the wide-ranging mayhem to follow.

A detailed double-spread presents the raucous crowd arriving in a bizarre array of handcrafted costumes. One pig is dressed like a bum and sticking out his tongue; one is a feather-decked Indian, while another is a parody of a proper lady with smeared lipstick and sky-blue eyes. In the midst of the bright procession, Mr. Sendak slips in a characteristic nod to the presence of mortality, with his image of a gold- and silver-eyed grim reaper wearing a crumpled brown tri-corner hat. Like the revelers, readers will follow the party as it descends into chaos and gluttony. The author skillfully serves up a profusion of verbs denoting excess: the swine broke down the door, they guzzled brine, hogged sweet cakes, and oinked loud grunts “and pulled all kinds of dirty stunts.”

Mr. Sendak’s well-chosen words virtually dissolve as he presents three riotous, moonlit double-spreads crowded with cake, lollipops, and wide-open mouths. From snout-tickling to piggyback riding, the beastly feast proceeds, with no adults in sight. That is, until sweet Adeline “hurried home so she could dine/ With Bumble on his birthday nine/ And found a mob of swilling swine . . .”

Employing a more casual, penciled-in look, Mr. Sendak shows the enraged aunt ousting the partiers and then confronting a tearful nine-year-old repentant. That’s just the right time for Adeline to sweep up her piggy valentine and kiss him “nine times over nine.”