The Bully Society: School Shootings and the Crisis of Bullying in America’s Schools 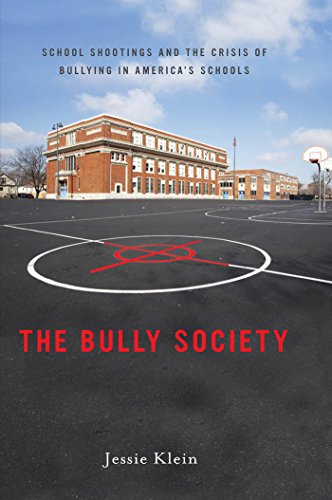 Like many social scientists probing the phenomenon of two decades of school shooting rampages, Jessie Klein, Assistant Professor of Sociology and Criminal Justice at Adelphi University, examined each case from Columbine onward and compared the data.

Most incidents occurred in rural or suburban areas and the perpetrators were white male teenagers seeking revenge for having been bullied.

Readers wanting an in-depth explanation of what’s behind school bullying will get that and much more in The Bully Society.

Professor Klein has rendered an exceedingly thorough analysis of the bullying and hate crimes and shootings that have shocked America in the last decade or so.

In addition Dr. Klein makes a compelling argument that the causes of bullying are rooted in the American culture itself—an obsession with masculinity and hyper-individualism that promotes competition over collaboration and denies young people the kinds of authentic bonding experiences that encourage the development of healthy self-esteem.

In the introduction, Professor Klein is unequivocal: “This book proposes that there are inextricable connections between school shooting outbursts, the “everyday violence of bullying, and the destructive gender pressures and social demands created by the larger culture and endured by virtually all children in our schools. . . . Nearly all the school shooters were violently reacting to oppressive social hierarchies in their schools.”

And now comes her disturbing thesis: “The conditions that have helped spark school shootings are not aberrations; they are the norm.”

And because it is the norm, the behaviors are often unrecognized as being harmful. In fact, Dr. Klein goes on to say, “Domination and control, two characteristic associated with being masculine, are hallmarks of typical teacher pedagogies and institutionalized school practices.”

The “norm” is boys and girls trapped in rigid gender roles that dictate what they wear and how they behave. The roles are enforced by the “gender police,” who use put downs, harassment, and social isolation to determine the social pecking order in schools.

Pretty girls and athletic boys, “princesses” and “jocks,” dominate the social hierarchy. They often get away with bullying because they are the arbiters of what’s socially acceptable. Professor Klein relays heartbreaking accounts of sensitive youth being told by peers, as well as by teachers and coaches. that they are unacceptable, misfits, losers. One chapter in The Bully Economy relates incidents of workplace bullying and violence that support the author’s view that the school bullying problem is a reflection of the values of our society.

Another chapter comparing America’s living standards and educational practices with Europe’s makes the compelling argument that until we come to see the value of having a cohesive society where social needs come first, we are caught in a destructive, bullying society whose most consistent victims are our often defenseless youth.