Bully: An Action Plan for Teachers, Parents, and Communities to Combat the Bullying Crisis 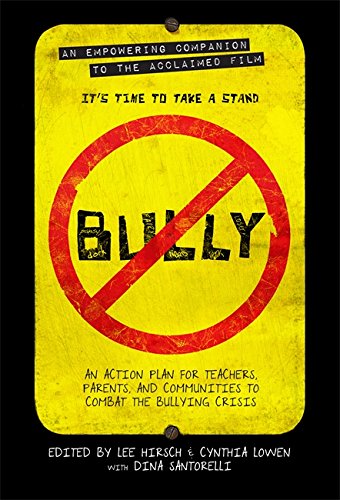 “Right now, bullied children need the help of their communities.”

Bullying is more than a national crisis: It’s a series of personal tragedies starting at schools, continuing on school buses, even stalking the victims at home on the Internet. The children whom other children have chosen to humiliate, even destroy, are no longer safe anywhere. That’s why so many susceptible youth are choosing death as the only escape. That’s what impelled Lee Hirsch, himself bullied as a child, to film a documentary.

The acclaimed film Bully took the audience into the belly of the beast. In a review of the film in the Los Angeles Times, critic Kenneth Turan wrote: “Nothing you’ve heard about it will prepare you for the experience of seeing it.” Viewers naive about how cruel and pervasive bullying has become, walked out of the movie stunned, asking, “What can be done?”

The answer to that question is found within the pages of Bully: An Action Plan for Teachers, Parents, and Communities to Combat the Bullying Crisis. Bully filmmakers Lee Hirsch and Cynthia Lowen were not content with their groundbreaking film. They have written a handbook—indeed, an action plan—full of information, sound advice, and ideas for community action.

Bully: An Action Plan not only gives additional insight into the family stories portrayed so poignantly and sensitively in the film, but it also supplies the tools to help readers become activists in a community wide effort to end bullying. To convince readers this problem can only be tackled by an entire community working together, Hirsch, Lowen, and Santorelli have given over pages to known experts in the field and guest essays by actors and others recounting their childhoods as both bullies and the bullied.

Alex Libby, the child from Sioux City, Iowa, whose victimization on the bus was one of the most disturbing sequences in the film, is now happily living with his family in Edmond, Oklahoma, where they all got a fresh start. The high-school-age Alex now attends has a mentorship program for kids with disabilities. Students a grade level higher than a child with a disability in the school are responsible for the child’s safety and inclusion. Alex has not had a single incident of abuse since the move and has made friends. The entire family has relaxed.

Kirk and Laura Smalley, parents of Ty, who ended his life in May 2010, were still in the grip of deep grief when they were interviewed on film. In the book, readers learn that they started an organization, Stand for the Silent (SFTS) to spread the anti-bullying message. They have been hundreds of schools to start SFTS chapters and attended the first-ever White House conference on bullying in 2010, where they met privately with Michelle and Barack Obama. They also met Lady Gaga, a strong anti-bullying proponent, who launched the Born This Way Foundation in February this year.

Bully: An Action Plan has 27 pages of website information and five pages of resource books on social and emotional learning and bullying prevention.

“We made Bully with the conviction that audiences, especially young people, can be moved off the sidelines and empowered to stand up for those around them,” Cynthia Lowen writes in the opening of the book. “We also made this film with the conviction that those children will become the next generation’s leaders, and CEOs and educators and innovators, and will show us new possibilities, not only in how we treat the people around us, but in how we lead as citizens of the world.”

Right now, bullied children need the help of their communities. With Bully: An Action Plan in hand, ignorance and helplessness are no longer excuses for not becoming involved in ending the bullying tragedies.