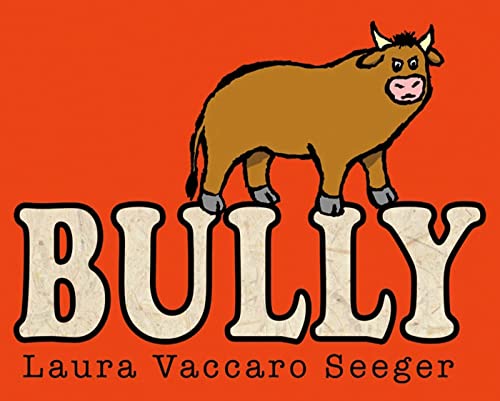 “. . . a picture book rich with possibilities.”

Laura Vaccaro Seeger hits the bullseye with her spare tale of a little bull who spells big trouble for everyone he encounters.

How did that bull get so mad at the world? In two pages and two words, Ms. Seeger shows us. Preceding the title page, we see a big gray bull telling the little one: “GO AWAY!” The story then opens with three friendly barnyard animals asking the bull to play, and the bull’s surly response of “NO!” There, that will show the world how he feels.

Naturally, the bull’s mood only worsens, and now he’s made others feel just as small and unwanted as he felt. But the little bull doesn’t consider the consequences of his behavior. He’s too angry to think. The others don’t understand what the problem is, either; they just know they’ve encountered one mean bully.

As with her previous, award-winning work (Green, First the Egg, and others), Ms. Seeger’s work shows an astute awareness of how to use design to dramatize actions and emotions in a picture book for young children.

For Bully, she has chosen a vivid, raw red for her cover and for the inside title, and shows the bull’s increasingly hostile remarks in big, bigger, biggest black capital letters. Her simple paintings of farm animals show off bright colors outlined in thick black ink. The action takes place upon soft beige pages streaked with lines that look a bit like falling hay. The rural setting is further evoked with a gray fence stretching across the pages. By using just a few images, the author/illustrator zooms in on the central conflict.

With sly humor, Ms. Seeger shows the bull employing words that actually describe the animals. He yells “CHICKEN!” to the startled chicken, calls the turtle “slow poke,” and denounces a grubby pink pig as a pig. Thus, she swiftly demonstrates the principle that it’s not just our words, but how we express them that affects others. It’s a timely message for National Bully Prevention Month and beyond.

The bull keeps it up until a spotted goat, observing the animals’ hurt expressions, makes a stand. The goat raises his chin and cries, “BULLY!”

“BUTT OUT!” the bull responds, but when the goat trots away, repeating his assertion, the bull suddenly stops to think.

His dismayed face fills the next page, as he ponders that one word and all it implies. The double-page spread that follows shows him reeling with this thought until he flops on the ground and, with a fat tear tumbling from his big black eye, says (in small letters), “Sorry . . .”

Then, in slightly larger letters (but smaller than his insults), he asks them the same question they had posed earlier: “Wanna play?”

The animals accept his offer, and they head toward an opening that has suddenly appeared in the fence. Yet another instance of an image that represents powerful truths: When we understand others’ feelings, we can find a path to more positive relationships. And when we forgive, we help ourselves and others to break out of the stranglehold of hostile habits.

Yes, the animals’ acceptance seems to come easily and quickly. As adults, we know it’s harder to regain trust than it is to establish it in the beginning, but that’s a story for older children. By recognizing the feelings of both sides as well as those of the observer who stands up to the bully, Ms. Seeger has created a picture book rich with possibilities.