Bullied: What Every Parent, Teacher, and Kid Needs to Know About Ending the Cycle of Fear 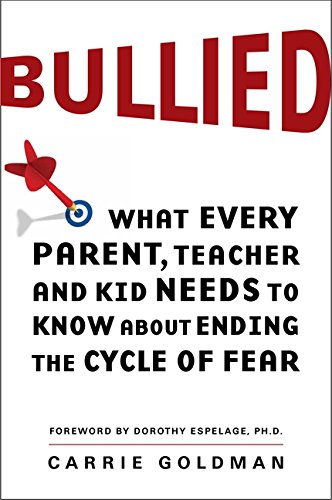 “Carrie Goldman has written a compelling, well-organized book providing a depth of knowledge about a national crisis and deftly showing how people working together in schools and communities can eradicate bullying.”

Bullying as a psychological and social problem is very complex. In order to respond to it effectively and humanely, educators and parents need to have a deep understanding of the nature of power, human relationships, and knowledge of how school and communities function in tandem.

In Bullied: What Every Parent, Teacher, and Kid Needs to Know About Ending the Cycle of Fear Carrie Goldman has written a compelling, well-organized book providing a depth of knowledge about a national crisis and deftly showing how people working together in schools and communities can eradicate bullying.

The book is divided into three parts. In Part One: Katie’s Story, the author tells how her young daughter was ostracized in the first grade for carrying a Star Wars book bag to school.

Katie was already “different” because she wore an eye patch and glasses due to vision problems. Her enthusiasm for Star Wars did not sit well with other girls who were already enforcing gender stereotypes and meting out punishment for non-conformists.

Katie, normally spunky, had become anxious and self-conscious. In the end, she gave up her precious Star Wars thermos and bag. She wanted to fit in.

Ms. Goldman, writer of a popular parenting blog called “Portrait of an Adoption,” became concerned about Katie’s downcast behavior and the assault on her individualism.

She posted a blog about Katie’s ordeal and overnight was swamped with messages of sympathy and commiseration from strangers who related their own sad stories about humiliation and social isolation from bullies because of gender non-compliance and anything else that made them “different” from other kids.

Ms. Goldman explores the role of gender and how it is being used to define and limit individual expression. Much of the bullying that takes place in school concerns gender appropriateness, an emphasis surprisingly relevant after the sexual revolution of the 60s and 70s and the “free to be you and me” ethic.

But the pendulum of social mores appears to have swung back to an emphasis on appearance, clothing, and accessories, and engaging in “gender-typical interests.” Those free spirits who don’t comply do so at their peril.

In Part Two, Ms. Goldman focuses on children who are at high risk for peer victimization. The list of “bully magnets” is long: children who are gay, lesbian, bisexual, transgender, children who have unusual physical appearances, who receive special education, who qualify for free lunch, who practice a minority religion and who have atypical family structures.

The author tells real-life stories of children from these groups that have been victimized and weaves them into a history of social trends.

The most disturbing chapter concerns the harmful effects of bullying on the brain. The author cites a study by Roth, Coles, and Heimberg in 2002, which discovered that adults who reported victimization during childhood had higher levels of anxiety sensitivity. Constant stress in childhood changes children’s danger perception radar, and the slightest stress triggers anxiety disproportionate to the threat.

Part Three delves into ways parents and educators can protect children from the negative impact of bullying by creating a home environment that is self-affirming for the child, that regulates use of technology and social media, and disallows music that promotes a double standard of male dominance and female subjugation. Practical advice is available for dealing with cyberbullying and gender bias in marketing.

Ms. Goldman’s final advice is for parents to stay connected to their kids while they are absorbing “cultural messages,” making sure that empathy and respect are used to counteract negativity, discrimination, and victimization.

Indicative of her thoroughness and commitment to change, Ms. Goldman has written a compelling book demystifying a complex social issue as well as providing practical suggestions, a helpful appendix, and a thorough bibliography.