The Bullet That Missed: A Thursday Murder Club Mystery 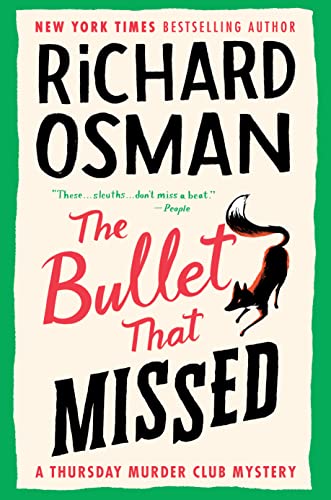 “Osman’s resolution of the various crimes and his manner of letting his team uncover the murder(s) are clever and captivating. Only his third book and already his fans are tapping their fingers, awaiting the next edition.”

Richard Osman is one of the few authors who can take several unrelated situations and weave them into one story, as seen in his newest book, The Bullet That Missed.

Third in his mystery series, The Thursday Murder Club Mystery, Osman takes a small group of senior citizens who meet regularly to discuss unsolved mysteries and reveals their efforts to resolve their chosen crime.

Elizabeth Best, Joyce Meadowcraft, Ron Ritchie, and Ibrahim Arif have decided the death of Bethany Waites is their next effort. Bethany was a TV anchor a decade earlier whose mysterious disappearance has faded into nothing more than a memory. A story of cryptocurrency and possible fraud further intrigues the investigators.

And here Osman begins introducing the many characters, on both sides of the story, who will become instrumental in solving the riddle . . . or not.

Mike Waghorn, popular host of a current TV show, is set to interview Ron, and the gang shows up to support him, but really to gather information about Mike’s now deceased ex-partner, Bethany.

Mike’s make-up artist Pauline takes a fancy to Ron and a romance begins to blossom.

In the meantime, Ibrahim, retired psychiatrist, interviews Connie Johnson, (a character from the last cold case) who is now in prison for drug smuggling and sales. Connie has sworn revenge against Ron for putting her in prison.

It is revealed that Heather Garbutt is serving a prison sentence in the same prison as Connie, for killing Bethany. Connie befriends Heather at Ibrahim’s urging, and before you know it . . . Heather is found dead in her cell. Is it murder or suicide?

As the story continues to unfold, new characters are uncovered with a relationship to Bethany. Elizabeth and her husband, Stephen, are kidnapped by a man known only as The Viking. They are released only after The Viking informs Elizabeth that she is to kill Viktor Illyich, an ex-KGB agent. Elizabeth, an ex-MI6 agent, has a current relationship with Victor and they let bygones be bygones. Once released, Elizabeth begins to receive text messages from The Viking threatening to kill Joyce if Elizabeth doesn’t kill Viktor.

Elizabeth can’t tell Joyce, but she sets a plan in motion with the help of Bogdan, Stephan’s chess partner and resident driver. She is being watched by The Viking so she confides her plan to kill Victor (but not really) to Bogdan, and her plan must be worked to the minutest detail.

In side stories, the helpful police partners of Donna and Chris, each form romances—Donna with Bogdan, and Chris with Donna’s mother Patrice. It doesn’t take long for everyone to be pulled into the search for answers to Bethany’s disappearance.

Fiona Clemence, past cohost with Mike and current host of a popular TV show, knew Bethany and their connection comes into question. Was Fiona jealous of Bethany and could Fiona be the real murderer?

And Jack Mason, head of Trident Construction, appears to have had a relationship with Heather Garbutt and knowledge of Bethany’s death.

And the final player in the game is Andrew Everton, Chief Constable, who is drawn into the mystery of Heather’s death as he keeps a close eye on The Thursday Murder Club team.

As the story continues to unfold, the Club uncovers the fact that Jack Mason knows who killed Bethany but refuses to reveal the identity. And while it may initially feel as though there are too many characters related to the story, Osman begins to pull all the characters into the resolution of the Bethany problem.

It doesn’t take long for another murder to occur—Jack Mason bites the bullet. And what he knew about Bethany follows him to the grave.

Osman’s writing style is clever; he moves through various points of view, and at times diverts from the story just to add a little color to a character or a scene. “Chris is thinking. The Thursday Murder Club starts looking into the Bethany Waites case and, before you know it, the two main suspects in her killing are dead. Hell of a coincidence. He glances at Donna. It looks like she’s thinking the same thing.

“‘I’m just thinking,’ says Donna, ‘that we should really do something about your trousers before the circus arrives.’”

It’s hard not to like the characters Osman has designed. Each plays a role in resolving the crime, and as a team they put their discoveries together into one tight little package.

Osman’s resolution of the various crimes and his manner of letting his team uncover the murder(s) are clever and captivating. Only his third book and already his fans are tapping their fingers, awaiting the next edition.