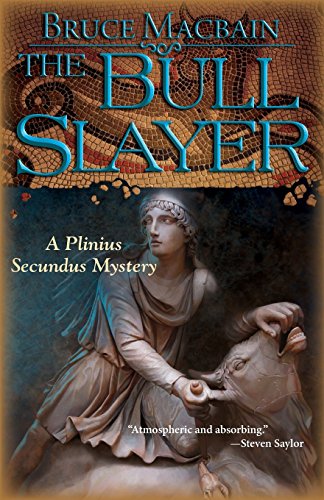 The Bull Slayer, Bruce Macbain’s new book and the second in his series of ancient mysteries, is not set in Rome but in the partially settled rough frontier of Bithynia.

The provincial settlers, different in station and politics, agree only in their hatred of Roman rule. With Mr. Macbain’s talents, such an atmosphere is the perfect setting for an ancient murder mystery. Gaius Plinius Secundus (Pliny), the appointed governor of Bithynia and The Bull Slayer’s main character, deals with various crimes, openly bloody, hidden in corruption, and some tangled affairs of the heart.

Mr. Macbain’s academic credentials, degrees in Classics and Ancient History, and his obvious passion for the era bring clarity and authority to his work. After only a few pages, readers are knee-deep into the story.

Mr. Macbain’s choices of details are apt and often curious concerning food, clothing, occupations, household and palace details, marriage, primitive government, and in the case of The Bull Slayer, murder.

The plot turns with ease in such a setting. Throughout the book, readers will find new respect for the ancients and their feasts, routines of life, details of initiations in a secret society, lovers’ trysts, and more—all of which sweep the characters along with nonstop action.

Consider a passage where a young wife feels her for passion for a lover, not for her husband. Distressed and innocent, she summons an unscrupulous healer and political enemy to help her.

Stroke by stroke, Mr. Macbein takes her through an initial naivety to unsuccessful resentment to a final awakening that she has been fooled, fooled so far, in fact, that she has essentially committed not only adultery but also treason.

The dialogue between the young woman and grotesque healer stings with evil and threats.

She leapt up, her bruised knee nearly buckling under her. He tried to hold her back but she tore away from him. She saw the chasm opening at her feet. “Filthy Greek spy! Get out!”

He stood slowly and smoothed his spotless white gown with his long-fingered hands. “As you wish. We’ll talk again.”

In other cases, Mr. Macbain juggles hope and fear and drops those elements with exacting care.

“What are we looking for, Sir?”

“I’m not sure. It could be I’m letting my imagination run away with me. Hold the torch nearer to the floor.”

Step by step they circled the room shifting chests, peering in the dark corners.

“Sir!” Galeo whispered. “Over here.” He pointed to an iron grating set in the floor behind a stack of chests; a hole just large enough for a man to crawl through. As they watched, a frightened rat squeezed between the bars and disappeared.

The fitting settings for the mystery pull the reader along, also giving the reader a choice to stop and look up a Latin word in the glossary in the back matter or to read continue reading. (For examples of the book’s Latin: Fasces: the bundle of rods inclosing an ax carried by lictors. Lictor: a Roman magistrates’ bodyguard.)

Such extras bring depth to the tale whether they enlighten readers about government, ancient medicine, or secret societies.
Early in the book, readers are introduced to a secret fraternity.

The crash of a bronze thunder sheet shattered the silence and unseen hands drew the curtains back. Then he gazed for the first time upon the mystery of his new faith. Suddenly he thought his heart would burst—the intensity of his feeling took him by surprise. Sculpted in high relief from the living rock, the figure of Mithras, a serene and handsom youth dressed in a billowing blue cloak and red Phrygian cap, straddled a kneeling bull with one hand, and plunging his dagger into its throat.

The Bull Slayer is a novel that is complete in every way. The Dramatis Personae aids the reader who wishes to keep track of over 30 characters and their positions in the tale.

The glossary noted above covers most everything from “Garum:” a condiment made of fermented fish parts” to “Univira: a woman who has known only one man.

The Author’s Note provides the scholarly reader with a brief, but authoritative, historical background of the book, and appendixes: The Roman Calendar, Roman Time-Keeping and Greek and Roman Money at the time of the book are options for the reader.

Further backmatter includes a Bibliography of primary sources. All this results in much page turning and very rich reading. Readers who are interested in both history and mystery will be delighted with The Bull Slayer.

The can’t-put-it-down story elements continue to the very end. After finishing The Bull Slayer’s end, “Readers will hope that Mr. Macbain will finish the last of his trilogy soon.

The final words of The Bull Slayer:

“‘Here, dearie, sip this.’” She held out a cup of boiled herbs to the figure that lay on a bed of rushes in the little hut.”

Mr. Macbain has already introduced the characters for his next book.