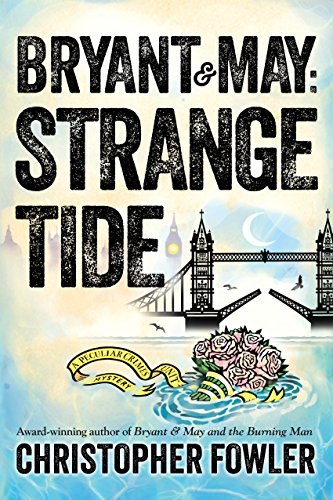 “The Thames holds the collective memory of the city and its dwellers . . . it’s a sacred river granting death and rebirth.”

Due to the ineptness of captain and crew, a boat carrying refugees catches fire and sinks. Only young Ali Bensaud survives, taking with him the silver chain and crescent amulet of his friend Ishmael who drowns.

In the years to come, Ali will achieve his dream. He reaches England, finding a partner, a young woman as cool and determined as he. Together, they become a pair to be reckoned with, walking the tightrope of illegality, dancing on the edge of criminal activity . . . and making a mint.

On the ancient embanked wall of the Thames, where the now inaccessible access to the river called the Queen’s Stairs is located, a young woman drowns, chained to a stanchion by a silver necklet bearing a crescent. Only her footprints lead to the body, but her wounds suggest murder. Her name is Lynsey Dalladay, a well-to-do young woman with everything, and nothing, to live for. She is also the lover of Alistair Thornberry, once known as Ali Bensaud.

At the Peculiar Crimes Division, Senior Detective John May becomes the literal caretaker of his partner Arthur Bryant, who is suffering from a bizarre form of dementia. May also leads the investigation of the “Bride in the Tide” as the papers are calling this latest murder.

In a very short time, the former Ali Bensaud and the two senior detectives of the Peculiar Crimes Unit will be on a collision course.

May gets permission to bring Bryant to the unit offices, providing he doesn’t let him go out on a case. As many times as not, Bryant eludes his partner and goes his own way, struggling to retrieve those myriad bits of information he’s stored in his brain before it dissolves into useless nothingness.

In his lucid moments, Bryant believes the Thames hold the answer.

“The Thames holds the collective memory of the city and its dwellers . . . it’s a sacred river granting death and rebirth.”

He’s certain he can find the reason why Lyndsey died where she did, and who assisted her in expiring in a way appearing suicide—if he can only retain his memory long enough—and while he’s at it, since his doctor has already written him off as incurable, he may just have to heal himself . . . if he can remember to do it.

There will be more murders. Bryant finds himself swept away in memories not his own, to other times in London’s history yielding clues he can use in the present. Ali Bensaud will become their chief suspect, but is he really a murderer, this young man determined to live out his dream of success and wealth? Or is he merely another victim of a very cruel and stealthy killer?

“London is the most observed city in the world, and the only place where a killer may ply his grisly trade unseen is on the river and its shore. . . . Three bodies pulled out of the river in three days. It’s not exactly our finest hour, is it?”

In the midst of a detective’s anxiety over the loss of his faculties and his partner’s concern for his old friend, John May will soon admit the truth about his failing partner: that “in the midst of winter, there is within him an invincible summer.” Though Arthur Bryant may be walking in the Valley of Death, he’s doing it armed with “a pint of beer, a pork pie, and a Batman comic,” for the most senior of the senior detectives has the ghosts of the Thames on his side.

There’s a great deal of historic lore, superstition, and information about the river, making this latest entry in the Bryant and May, Peculiar Crimes Unit series perhaps the best so far. The two men are fighting two foes: an intangible one more formidable than the Grim Reaper, and a human with no consideration for life.

A Strange Tide is full of those Bryant-May moments their fans have come to love and expect: witticisms, ironies, and fanciful turns of phrase paired with informative digressions inevitably leading to cogent conclusions. The two may be getting up in years, but they always prove they get better with age.  Here’s hoping award-winning author Christopher Fowler will continue writing of their adventures for some time to come.