Bryant & May: Oranges and Lemons: A Peculiar Crimes Unit Mystery 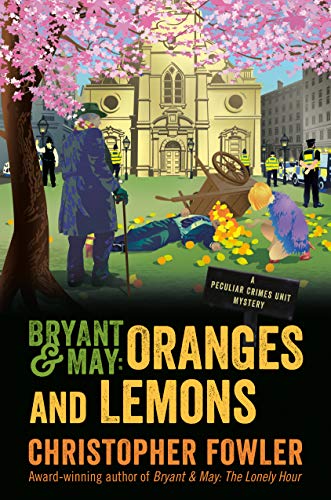 “With the history of a centuries’ old nursery rhyme as its starting point, it’s the best Bryan and May mystery by far.”

The Peculiar Crime Unit has again been disbanded—this time for good, as the memo sent by Unit Chief Raymond Land confirms:

“What did I specifically ask you not to do? Don’t get us closed down, I said. I wasn’t asking much. I know what you’re going to say: We’ve been closed down before. This time it’s for good.”

In other news, John May is in University College Hospital, recovering from gunshot wounds received in their last case, and facing a number of charges arising from that investigation. His partner, Arthur Bryant  is nowhere to be found, after a fallout with May in which neither man will admit his wrong-doing.

And then—much to Chief Land’s dismay (or relief)—there’s an eleventh-hour reprieve.

Michael Claremont, Speaker of the Houses of Parliament, is injured crossing the street, when a crate of oranges slides off a lorry and knocks him unconscious. Because of his status, it’s imperative that it be proven his accident was actually that and not an assassination attempt.

“‘Was Claremont just incredible unlucky? Had his head in the clouds, stepped out without looking? Or does the Home Office think there’s a conspiracy? He talks to the wrong person and says something so revealing they try to kill him in a staged accident.’

‘Accidents are easier to establish than conspiracies,’ Banbury told him.”

Assassination by orange crate?  Who better to investigate than the Peculiar Crimes Unit? Which no longer exists.

The gang is put together again (“like the Blues Brothers,” someone comments) and Arthur May is soon in his element, investigating a crime involving orange and lemons that takes place a few doors from St. Clemens’ church.

He’s already dissecting the old nursery rhyme apart, line by line, to determine if it pertains and how event so far fit its words. “‘The best-known version of “Oranges and Lemons” has six calls to action. That leaves four more victims to be attacked in public places. It’s no longer about deciding whether Claremont is a security risk. This is something bigger.’”

One name keeps popping up: Peter English, a man with so many powerful ties, he’s never been indicted for anything despite his obvious involvement in numerous crimes.

May is momentarily distracted by a frantic widow who asks him to investigate the death of her husband, a bookshop owner. Arrested for  burning down his shop for the insurance, he hanged himself in his cell. She doesn’t think he committed suicide. Soon, May doesn’t think so, either.

After someone else dies in an odd way outside another church mentioned in the old nursery rhyme, he’s convinced Cristian Albu’s death may be connected, but how?

Meanwhile, Chief Unit Land has his own problems in holding the unit together long enough to solve the case, the biggest of them being Tim Floris, the “advisory interlocutor” assigned to the PCU by the Home Office—i.e., to follow Land around and point out the Unit’s mistakes and tattle them to the HO—and Sidney Hargreaves, a bright young thing who’s a female Arthur May filled with esoteric knowledge.

Not ones to wait around for the next body to show up, Bryant and May, with Sidney occasionally in tow, try to outthink the murderer, but this one is always ahead of them—as if he knows what they’re thinking. They’ll follow up a lot of dead ends before everything’s said and done.

The geriatric duo are about to discover the roots of their case go back 20 years or more, and involve a great number of important personages. This case has more twists than a coil of spaghetti, but a single, drastic case of mistaken identity will be the killer’s undoing.

In this story, readers will learn more about the history of the nursery song “Oranges and Lemons” than they probably wish to know, but it’s all in good fun as May rattles along on the trail of a murderer with a batch of scores to settle.

There’s some soul-searching between the two detectives as they patch up their own disagreement, revealing their true feelings for each other as well as how their friendship has evolved over the decades of their association.

Best of all there’s plenty of the humor of May’s digressions, though his seeming rambles always contain something cogent to the case.

Interspersed with the investigation is the killer’s own fervent explanation of why the deaths happen. This criminal’s cleverness can only be appreciated after the revelation of that final confession.

Oranges and Lemons is the 17th entry in the Peculiar Crime Unit series, and in some ways, with the history of a centuries-old nursery rhyme as its starting point, it’s the best Bryan and May mystery by far.