Bryant & May: London Bridge Is Falling Down: A Peculiar Crimes Unit Mystery 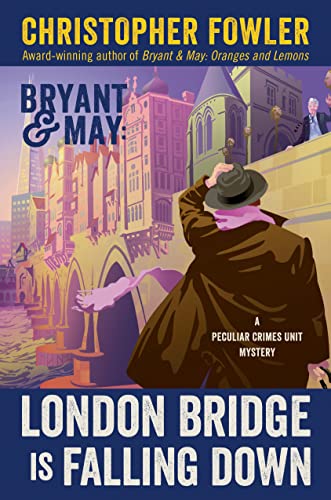 “Regard this novel as a grand and glorious swan song.”

The Peculiar Crimes Unit has finally been disbanded; its members are told they won’t be reassigned, and it’s doubtful they’ll be paid. Never fear, Arthur Bryant has a plan to keep the PCU going: Simply find a cold case, reactivate it, and prolong the investigation.

Luckily, such a case exists. An old lady is found starved to death in her flat. Investigation reveals she wrote Health Services terminating the meals brought to her, and locked herself in her apartment, refusing to see anyone. Forensics determines the letter is a forgery, that someone was deliberately isolating 91-year-old Amelia Hoffman from everyone.

In another part of town, a minor diplomat is involved in a hit-and-run, killing an embassy employee. He offers classified papers to the CIA to prevent his arrest.

How are these two events related?

After Bryant’s investigation brings to light certain facts, Unit Chief Raymond Land sums it up: “Two women dead, two more at risk, neither of them willing to tell us the truth. One male attacker at large, apparently untouchable. No motive, no witnesses. All information redacted. Plus the possible involvement of MI6 and the CIA. All because you popped over the road to check on an old lady who’d passed away.”

In other words, a typical Bryant and May case, and one that only Bryant and May can unravel, going through a spiral of events and numerous deaths, into rabbit holes beginning with the conception of the PCU and the involvement of the women called the “Three As,”—Amelia, Angela, and Anna—and their work during the Second World War, plus a memo sent out by a “young and adorable” newly-recruited teenager named Arthur Bryant.

This is one crime that ends where it began, and no one is more surprised to learn this than Bryant.

“We never stood a chance. We were set up from the start, possibly from the birth of the Unit. No wonder the whole charade began and ended here.”

This is less a review and more an obituary, or a requiem, if you will. It would seem, for all intents and purposes, this is the last Bryant and May novel, and, as with the end of anything, one always wants to do a nostalgic look back and highlight the good times.

Breaking a major rule and dropping the reviewer’s persona, for a moment, let me say: I wasn’t there for the debut novel, but came into the adventures of Bryant and May a few volumes later, though I managed to read the others intermittently and feel privileged to review this last entry. I was younger when I started reading this series but am now the same age as the two geriatric detectives who are its heroes. I’ve enjoyed the fanciful crimes, laughed at Bryant’s zinging one-liners aimed at the hapless Land, absorbed the snippets of history, and marveled at the amazing characters. I also admit to unashamedly shedding a tear as I read the last line in this particular story.

There’s not enough space to say all that’s likeable about this series except that it will be missed—although the author, in his Acknowledgements, hints that the end may not be as permanent as it looks.

Only time, and Christopher Fowler, will tell.

Regard this novel as a grand and glorious swan song.

In the meantime, like the stars shining over London, “the city may be too bright to reveal them, but everyone knows they will always be there.”

Thank you, Mr. Fowler, for a series well done.

“Bryant and May Forever.